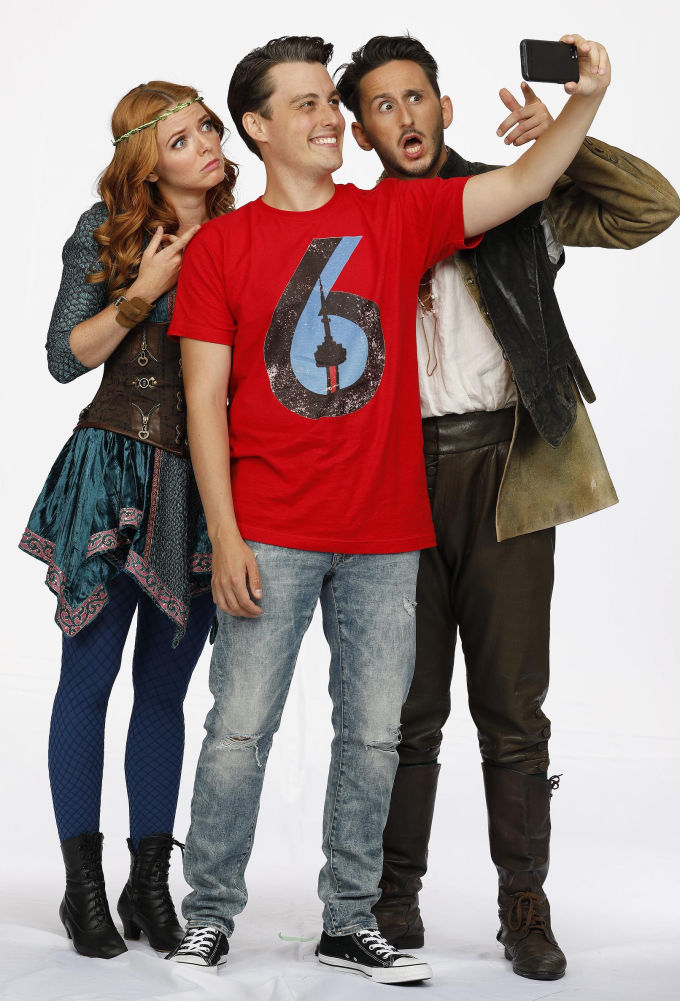 There have been Robin Hood plays or play-games since at least the 1400s. When in the 1800s the clichés of what makes up the British pantomime tradition began to take shape, Robin Hood was there as well. Every holiday season, somewhere in the English-speaking world there’s a family entertainment play starring our favourite outlaw. In 2019 Robin Hood can be found in Southend-on-Sea and in the New Theatre Royal in Lincoln (home to the shade of green Robin most commonly wears) and in Hornchurch. And Robin Hood’s also appearing in pantos in Canada, including in the city in which I live, Toronto, Ontario.

This isn’t Robin Hood’s first visit to Toronto. Ross Petty Productions has been staging annual pantomimes (or “Merry Family Musicals”) since 1996. [Although this year they've moved upstairs from the Elgin to the Winter Garden, located in the same double-decker complex. The garden-style foliage of their new home is perfect for Robin Hood.] The Ross Petty pantos started with Robin Hood in 1996 and returned to the legend in 2002, 2009 and now again in 2019.

This year’s production is a little bit different. It’s not a traditional Robin Hood story. It’s not even quite Robin Hood’s traditional pairing with Babes in the Woods. No, this year the Christmas panto is a time travel story. That might sound fanciful, but it’s far more political and relevant than most pantos are.

The show begins in 2019 with a struggling student named Lil’ Red (Robert Markus). Red needs to pass a history test to get ahead in life, and that’s a problem when thanks to funding cuts there are 40 students per class and Red learns in a non-standard way that needs a bit of TLC. He’s managed to purloin a cheat sheet to his world history test. The school caretaker (Daniel Williston) sets him on the straight and narrow with a question “What would J.S. Do?” J.S.? Jon Snow from Game of Thrones, of course.

What Jon Snow probably wouldn’t do is be sucked into a locker and magically transported through time to the year 1519. But that's what happens to Red. He’s not in Toronto, any more. (Or “Torontoshire” as the folks in 1519 call it.)

Red meets Marion (A.J. Bridel) and her “painfully single nurse” Sugarbum (Michael De Rose), and he discovers he is in Sherway Gardens Forest. (A fusion of Robin’s tradition Sherwood Forest home and the Toronto-area shopping mall Sherway Gardens.) Marion is the last remaining teacher in the land.

That’s because the power in Sherway Gardens Forest is the Sheriffe of Naughtyham (Sara-Jeanne Hosie) and aided (well, sort of) by her wizard Marvin (Eddie Glen). The Sheriffe has shut down the schools and seized all the books. She hopes to be the sole source of information.

SHERIFFE: In no time I’ll have dumbed them all down. And I’ll be the smartest person who ever lived.

The Sheriff seizes Red’s 2019 World History Textbook – a book that contains information she can use to bend the world to her will. Marion figures out what danger the world could be in and goes to her ex – Robin Hood, the outlaw hero that the wizard Marvin has an unrequited man-crush on.

Marion and Robin meet and things are tense between the two. On the other hand Sugarbum and Friar Tuck (Daniel Williston again) hit it off. And this Tuck isn’t celibate. Friar is merely his first name and he identifies as an “optimistic nihilist”.

Robin expresses sympathy for Marion’s educational concerns, but he’s reluctant to get involved. He’s got his own obsession.

ROBIN: I steal from the rich and give to the poor – that’s my whole deal!

Eventually, Marion enlists Robin’s aid, but they are both captured. The Sheriffe has been peaking at the book. It’s up to Red to step into their shoes and save the day. There are some heroic hijinks and Red answers the question “What would Jon Snow do?”

The Joy of Panto

The cast of Lil’ Red Robin Hood is uniformly excellent. Robert Markus is charming as the male lead Red. Lawrence Libor is allowed to be slightly more fallible and funny than Robin Hood would be if he were truly the central character.

A.J. Bridel sparkles as Marion. I like how she insists that the castle raid is her mission and “I don’t want to see any backseat missioning” from Robin. Perhaps it’s a nod to panto tradition that Marion is the true leader of the couple. While the Ross Petty pantos haven’t generally followed this element of the older British tradition, there was a time when the lead male — the “principal boy” — character (either Red or Robin in this show’s case) would have been played by a woman. We have records of various female Robin Hoods or Allan-a-Dales in historic British productions.

But a lot of the fun in a panto doesn’t come from the heroes, but from the comic and villainous characters.

Daniel Williston’s Tuck is amusing by himself, but paired with Michael de Rose’s Sugarbum — that’s the real romantic pairing of the show.

Sugarbum is the traditional “panto dame” — a man in woman’s costume - who makes outrageous comments that soar over the children’s heads to delight the parents in the audience. Red has a cold in the show, and at one point they actually cover his nose and mouth leaving him unable to breath. Sugarbum quips that they should have had a “safe word”. When a guard discovers our heroes have broken free of jail, he asks “How long have you been out?” An offended Sugarbum retorts “That’s personal!”

Then we get to the villain of the piece — the Sheriffe of Naughtyham — played with gusto by Sara-Jeanne Hosie. When they started in 1996, the production’s founder Ross Petty kept the plum bad guy role for himself, but as delightful as Petty was in the earlier shows, his absence is not keenly felt. Hosie more than earns all the boos she gets.

Boos? That’s how pantos work. Audiences cheer the heroes, but they even more enthusiastically boo and hiss at the bad guys.

There’s a special magic in live theatre — the supposed invisible “fourth wall” between the players and the audience. We can see them, but they aren’t supposed to see us. Of course, the performers do and draw energy from the audience. But in panto, the fourth wall is broken. The characters on stage are allowed to know they’re being watched.

When the Sheriffe contemplates whether she should read Red’s book with knowledge of the future, she asks the audience’s advice. Of course all the kids shout “No!” And she evilly dismisses the audience with a “Get over it!”

Some of the audience participation is even more spontaneous. One of the running gags is that for all her protestations of being a genius, the Sheriffe is unable to pronounce the word “nemesis”. After the Sheriffe tripped over the word for what might have been the tenth time, the child next to me yelled “You’re saying it wrong!” In a grown-up show, it would be scandalous for an audience member to shout like that. But in a panto, it’s all part of the fun.

And if there’s one actor in the cast who knows about the fun in a panto, it’s Eddie Glen who returns for his 17th production. He plays Marvin — the wizard who hangs out with the Sheriffe but isn’t so bad after all.

The Sheriffe is obsessed with her coronation, but Marvin notes from the history book that it would be “the most poorly attended ceremony until 2017.” And just in case you didn’t pick up on who he was referring to, Glen does an extended Donald Trump impression that’s on par with Saturday Night Live.

Pantos often have topical references — little gags to real world events. For example, when reviewing history’s greatest disasters in the World History Book, they mention Andrew Scheer and “I guess that’s one way to put your kids through school.”

If I had attended an earlier show, I’d have missed that joke. It was only a few days before the performance I attended that Andrew Scheer resigned as leader of Canada’s federal Conservative Party for using party funds to help privately educate his children. And yet the joke was very appropriate for this show.

The show is based around the importance of education. Marion is the brave last teacher. And the evil Sheriffe is gleeful over the prospect that “Total cultural stupefaction is within my grasp!”

The provincial government in Ontario seems to have declared war on teachers and education — on issues such as class sizes. And in the Democratic primaries occurring in the United States at the moment student debt and the prospect of free higher education are a popular topic. Lil’ Red Robin Hood covers these concerns.

When Robin Hood is teaching Red how to shoot a bow, they discover they share something in common. Both learn better by doing things. They can’t just be taught from a book — they need to experience it. When politicians make cuts to education, students like Red suffer.

The show’s message is clear in the declaration “Free the teachers —- and support them!”

Music and Other Matters

Pantomimes aren’t quite book musicals in the Rodgers and Hammerstein tradition. They generally do not have original songs, and this show is no exception. Most of the songs are very recent pop/rock high energy tunes that pump up the crowd. Robin’s song is “Natural” by Imagine Dragons from 2018, and most tunes are of similar vintage.

There are a few exceptions. Marion’s classroom gets the 1970 Jackson 5 hit “ABC” and Eddie Glen sings Foreign’s 1977 hit “Cold as Ice” about the Sheriffe.

But the best bit of music is the instrumental music when the Merry Folk (yes, not Men) meet up. There’s tension between Marion and Robin’s rival faction and they squabble over what side of the forest they are on. The music is Leonard Bernstein’s incomparable score for West Side Story — depicting the rival gangs. And when Marion and Robin’s feelings for each other rekindle, we hear the Bernstein score for Tony and Maria’s dance at the gym.

Pretty much everything about Lil' Red Robin Hood. is a triumph. The staging is colourful and distinctive. The music is engaging. The jokes hit their intended targets. The cast is on top form. But underneath it all is a strong message, and when it’s delivered in such an appealing package, maybe it will stir the audience.

There's even a bit for internet medievalists such as myself. I never expected to hear Geoffrey of Monmouth name-checked in a children's show.

© Text and Location pictures, Copyright 2019 Allen W. Wright - All Rights Reserved
Quoted text are copyright their respective owners and used under fair use for the purpose of criticism and review. The cast photos were provided by B-Rebel Communications. The photographer is Bruce Zinger.
As an Amazon Associate I earn from qualifying purchases from the links associated with these interviews (at no additonal cost to you).