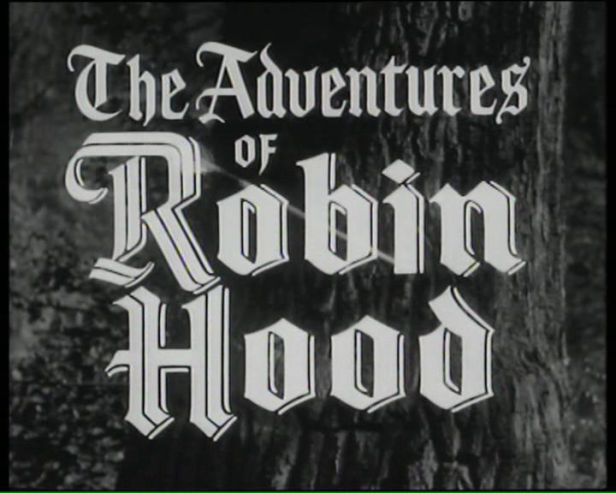 There's a common mistake made in North American articles about British television. They refer to the entire televisual output of Great Britain as being from the BBC. Time and again, The Adventures of Robin Hood and Robin of Sherwood have been called BBC programmes. Of course, those in the UK know that the BBC isn't the only broadcaster in the land. But that wasn't always the case.

The series lasted four seasons and 143 episodes. It was nigh-impossible to achieve swashbuckling action on a TV budget and fast filming schedule. But despite the technical problems, there is a lot of merit in this old series.

The Spotlight article is divided into several sections.

Richard Greene's Robin is not the swashbuckling Robin of Errol Flynn or the student radical Robin of Michael Praed. It's not that there isn't a bit of trickster to this Robin. You do seem a gleam in his eye on occasion. But it's a much safer sense of humour than that of other Robins.

There's something very safe and reassuring about Greene's Robin Hood – not entirely unlike the good-natured, father figure that Batman was in 1950s comics. Film historian Jeffrey Richards had called him "everyone's favourite uncle", and drawing the obvious comparison to a World War II officer, Stephen Knight has dubbed him "squadron leader Robin Hood". As Knight explains, the Robin's paternal nature fits the welfare state of 1950s Britain. In some ways,

Greene feels like a grown-up version of the youthful Robin Hood of Richard Todd in the 1952 Disney film The Story of Robin Hood and his Merrie Men.

As an uncle or father figure, Greene presides over a likeable family of Merry Men. They are mixture of kindly uncle figures and overgrown children – who like Peter Pan's Lost Boys never quite learned how to grow up

Little John, played by Archie Duncan, is a fairly amiable lieutenant and playground friend, despite – or perhaps because of - the character's hot temper and dim wits. Duncan brought the same likeability to his role of Inspector Lestrade in the 1950s Adventures of Sherlock Holmes TV series.

But Duncan was less sympathetic in his first appearance in the Robin Hood legend when he played Red Gill – killer of Robin Hood's father – in the 1952 film.

The real-life Duncan was more a hero than villain. He was replaced for five episodes by Rufus Cruickshank as Duncan was off recovering from injuries sustained while rescuing some children from a mishap on set.

Alexander Gauge plays Friar Tuck – Alfred Tuck, to give the character's full name – as a bit of den mother or school marm. Tuck sometimes blusters at Robin and his men. Along with Marian, this Friar Tuck played the role of a spy – his connection to the outlaws was suspected, but not confirmed. So, he could pass information to Robin, give sanctuary to fugitives and give aid to the poor and oppressed of the town. Generally a more respectable Tuck than some, Gauge's interpretation still takes great delight in more food and ale than a proper holy man might.

In "A Tuck in Time" we discover that our favourite friar has a corrupt twin brother named Edgar, who later returned to cause more "Double Trouble".

Much the Miller's Son is a minor character in this TV series appearing in a few episodes, played by different actors.

But the mascot function of the character is ably handled by a new character, the diminutive Derwent played by Victor Woolf.

The Adventures of Robin Hood had a repertory of guest actors. Folks like John Dearth, Willoughby Gray and Paul Eddington played dozens of parts in the series. Woolf was amongst them. Even though his Derwent – or Cedric, in the early episodes – was a regular character he still played guards, clerks, seedy tavern owners. Sometimes Woolf played more than one role in the same story (apparently he played four different parts in one episode).

In the fourth and final season, Paul Eddington also made the transition from perpetual guest star to series regular when he became the new Will Scarlet.

The character appeared in two episodes of the first season played by Ronald Howard (who also played Sherlock Holmes opposite Archie Duncan). The dandy, fashion-obsessed Will of Winchester initially rejected the outlaw way of life because Lincoln green just wasn't fashionable. Will got in trouble for his philandering, which including cuckolding the sheriff by seducing his girlfriend and then hiding under the bad guy's bed. Forced into the outlaw life, the name Will Scarlet was chosen to remind everyone of his old dress sense.

Eddington's Will appeared in "The Lady-Killer", highlighting his flirtatious behaviour. But soon the character settled down and was considered a wiser member of the band than Little John. Starting with the episode "Six Strings to His Bow", Will was paired up with Alan a Dale played by Richard Coleman.

And as usual, the Merry Men wouldn't be complete without an uncommon woman - or I should say uncommon women as two actresses played the role of Maid Marian.

Bernadette O'Farrell played the Lady Marian Fitzwalter in the first two seasons. Much like the Olivia de Havilland version of the character, this Marian acted as a spy for the outlaws by maintaining connections with the court.

However, the TV Marian took an even more active role in events. When she first encounters Robin's band, Marian proves her worth by outwrestling and outshooting a Merry Man. It's said more than once that her archery skills are equal to Robin's. It is the 1950s, and so we don't get to see her in action as much as some Marians, but she often hangs out at the outlaw's camp in a uniform not unlike Robin's own. An early episode establishes her fondness for boy's clothes.

For the 1950s, O'Farrell's Marian is a very strong female character. Maybe that shouldn't be so surprising when the series had a female executive producer in Hannah Weinstein and a woman apparently wrote Marian's "origin" story. (The episode is credited to Anne Rodney. But given the frequent use of pseudonyms by the writing staff, it would be hard to know who was actually responsible for the episode.) Stephen Knight has called this Marian "a highly capable ATS officer", referring to the women's auxiliary in World War II.

In the third and fourth seasons, Marian was played by Patricia Driscoll.

Some fans have complained that Driscoll didn't have the proper bearing that daughter of the Lord of Fitzwalter Hall would have. Maybe not, but what she lacks in aristocratic airs, Driscoll more than makes up for in her tomboy and pixy charm. The Robin Hood-style outfit suits Driscoll very well.

The Sheriff of Nottingham (and his Deputy)

The Sheriff of Nottingham was played to villainous perfection by Alan Wheatley. He schemed and double-crossed his way to defeat each week. One of the sheriff's blind spots was his obvious affection for Maid Marian. He didn't pursue Marian with the vigour that evil suitors usually did, but his fondness for Marian did blind the Sheriff to her true allegiances. The sheriff's replacement wasn't that interested in Marian, nor was he fooled by her. In the fourth season, the regular sheriff departed for London and was replaced by the Deputy Sheriff, played by John Arnatt. Arnatt seemed wiser and more dangerous than Wheatley's Sheriff. And in the 1967 film A Challenge for Robin Hood starring Barrie Ingham, Arnatt would return as the full Sheriff of Nottingham.

There's yet another cast member who appeared elsewhere in Robin Hood films. Ian Hunter was the King Richard who pardoned Flynn's Robin in the 1938 The Adventures of Robin Hood. In this show, Hunter seems to have been demoted as now he's Sir Richard of the Lee (straight from the early printed ballad A Gest of Robyn Hode), a friendly but sometimes troublesome ally to Robin. Although he didn't appear in the first episode, Hunter was credited in the TV Guide listings for it.

Apparently, his name had some value. Also missing from the first episode, but receiving credit was Donald Pleasance, one of a few actors to play Prince John in the TV series. Of course, the TV series also had many guest villains, often robber barons in the upper class twit mode. The choice of such villains was but one manifestation of the political sentiments running through The Adventures of Robin Hood.

Continue on the next sections

This is only the first page in a multi-part article.

PAGE 2 - Writers and Episodes (and Lyrics)

PAGE 3 - Merchandise, Movies and More (and ordering links too)