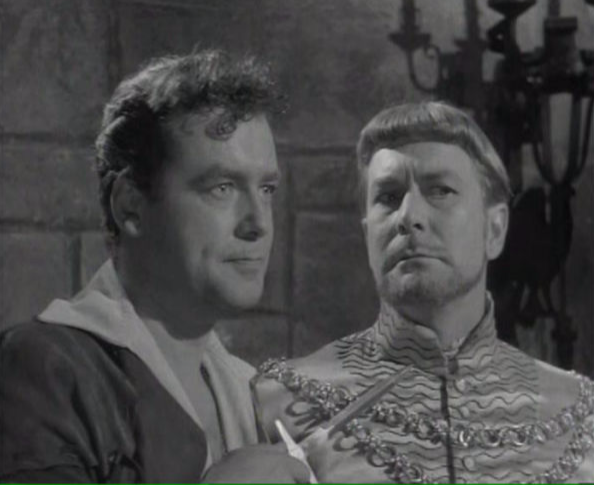 This is the 2nd page of a multi-part article looking at the influential 1950s TV series. Below you'll learn about the show's writers and episodes, as well as its memorable theme tune.

Go back to Page 1 to learn about the colourful characters and the actors who played them.

Setting Up the Tale

The first episode ("The Coming of Robin Hood") has Robin of Locksley returning home from the Crusades to find that his manor has been taken over by a Norman knight, Sir Roger de Lisle (played Leo McKern, of Rumpole of the Bailey fame). Robin goes to see the Sheriff of Nottingham to seek justice. But in the meantime, he rescues a serf who was poaching a deer. When the sheriff plans to arrest Robin for his interference, Robin reminds the sheriff that Robin's father was a royal forester and the authority has passed to him.

ROBIN: You dare to speak to speak in the name of the crown? I bear a letter from King Richard who shall here of this by the first courier to the Crusades!

SHERIFF: May we see this letter?

ROBIN: You doubtless recognize the royal seal. The first part is some remarks his majesty was good enough to make about my military service. The second asks all officers of the crown to give special assistance to any cause of mine.

DE LISLE: My Lord, I protest! This is undoubtedly a forgery.

SHERIFF: The seal is authentic. Why was I not shown this before?

ROBIN: This used to be a court of justice, whether one bore a king's letter or no.

- The Coming of Robin Hood

This very first episode sets up that Robin of Locksley not only has the moral right to do what he does, but the legal right as well.

While Robin scores a victory in the sheriff's chamber, it is only a temporary one. Although Robin is given his lands back, De Lisle plots Robin's murder. The evil Norman is killed by the crossbow bolt meant for our hero. Robin escapes, now framed for murder, and joins a gang of outlaws in the forest, run by Will Scathelock.

In "The Moneylender", Robin's ways clash with Will's more practical approach to outlawry. For example, Robin robs a moneylender (played again by McKern) and returns the overcharged interest to the peasant borrowers. (As Robin explains to one villager, "These are strange times, Hawkins, when the sheriff protects those who steal and brands as thieves those who return the stolen goods.") Eventually, Will is killed in an ambush and bequeaths command to Robin. With his dying breath, Scathelock confirms Locksley's new name -- Robin Hood.

And so it begins.

Such plots don't seem that out of keeping with the modern film and TV versions of the Robin Hood legend. But contemporary viewers would have got something more out of those episodes. Stephen Knight says that when Robin returned from abroad and found the country in "poor shape under the greedy Normans" that "A relationship with the postwar British decision to dispense with Churchill and the Tory government seems close." (Mythic Biography, p. 160)

When attempting to recover his lands by legal means, Robin waits in the sheriff's office and endures the insults of his clerk. "You crusaders are all alike. You volunteer to go to the war of your own accord -- nobody makes you go -- and then you expect special consideration because of it." After a showing of this first episode, Robin Hood historian Julian Wasserman drew my attention to that scene. He said that anyone who saw the shabby treatment towards returning World War II veterans would know exactly what that scene was really about.

Ring Lardner Jr., who wrote many episodes of the series, said in his autobiography, I'd Hate Myself in the Morning, "The Adventures of Robin Hood gave us plenty of opportunities for oblique social comment on the issues and institutions of Eisenhower-era America." (Lardner, p. 141)

Contemporary prejudices were often explored. For example, in "Dead or Alive", the first Little John episode, Little John is a serf to a Norman lord. When his master's girlfriend is impressed by John's strength, the master orders John to take off his tunic. "Whatever the mental differences between Norman and Saxon, we are alike physically. Cold weather stock." Then the lord says, "I think I'll select the healthiest lass I can find on the estate and marry him to her. Ought to produce a remarkable litter." Since the 1819 novel Ivanhoe, racialism -- or racism -- has been a consistent theme in the legend. But here, it feels more chilling than the more open Saxon vs. Norman antagonism. The scene shows prejudices and attitudes (on intelligence and selected breeding) all too common at the time -- and not just in Nazi Germany of the previous decade.

Alexander Gauge plays Friar Tuck – Alfred Tuck, to give the character's full name – as a bit of den mother or school marm. Tuck sometimes blusters at Robin and his men. Along with Marian, this Friar Tuck played the role of a spy – his connection to the outlaws was suspected, but not confirmed. So, he could pass information to Robin, give sanctuary to fugitives and give aid to the poor and oppressed of the town. Generally a more respectable Tuck than some, Gauge's interpretation still takes great delight in more food and ale than a proper holy man might.

The episodes "The Wanderer" and "The York Treasure" feature Jewish refugees and an attempt to stir up hatred against them. "The Scientist" features a character who invented a giant lens that could concentrate sunlight and destroy ships. As absurd a James Bond weapon as that may have been, weapons too powerful to be used by anyone were a natural theme for a time when people lived in fear of the atom bomb.

The first season episode "The Inquisitor" has Tuck held by a corrupt abbot who tries force Tuck into confessing his suspicious allegiances. In the fourth season episode, "Goodbye, Little John", the Deputy Sheriff offers to pardon the outlaw lieutenant. Little John refuses when he correctly guesses "the pardon proves that anyone who wants to leave Robin Hood's band and live under the law of a tyrant can do so by toadying to you!" These episode reflect McCarthyist America and the anti-communist witch hunts. Many of the writers were all too familiar with McCarthyism, persecution and betrayed allegiances.

Executive producer Hannah Weinstein was an American and left-wing political activist who moved to Europe in 1950 when politics at home were turning against her. She assembled a number of left-wing writers who had been blacklisted in the United States to craft episodes under pseudonyms. According to Lardner, they had to often change pseudonyms to avoid having too impressive writing track records in case "the network people in New York might ask to meet one of us for the prospect of other work." (Lardner, p. 142)

Lardner was one of the few who actually served jail time because of his Communist Party connections. Unlike later blacklisted writers, Lardner defended himself based on the First Amendment rather than the Fifth. When Congressman J. Parnell demanded that Lardner answer the famous question if he had ever been a member of the Communist Party, Lardner replied with wit worthy of Robin Hood himself. "I could answer it, but if I did, I would hate myself in the morning." Other blacklisted writers included Ian McLellan Hunter, Robert Lees and Waldo Salt. These writers also went on to create The Adventures of Sir Lancelot and The Buccaneers.

Lardner concludes "Robin Hood ran for four years, generating profits for everyone concerned and perhaps, in some small way, setting the stage for the 1960s by subverting a whole new generation of young Americans." Many children of that generation would be inspired by this series. One professor remarked that show formed the basis of her morality.

Nottingham resident and Robin Hood expert Michael Eaton wrote Fellow Traveler, an HBO TV movie that explores the life of a fictional member of the Hollywood blacklist. The writer works on The Adventures of Robin Hood and in some fantasy sequences, Robin Hood episodes take dark turns to reflect the inner demons of the character.

But while the series dealt with contemporary politics, it often explored them through genuine medieval laws. "A Year and a Day" features a runaway serf achieving freedom after spending a year and a day in the city, as per medieval tradition. When the sheriff tries to find the serf, he organizes the hue and cry. (It was author Clayton Emery's description of this episode which convinced me to look past the production values and give the show another chance.)

"The Final Tax" features peasants suffering from the heriot -- or death - tax.

As Jeffrey Richards observed, "in the television age, Robin became what he had never been in history or legend: a champion of the serf against the manorial system." (Richards, p. 140)

Borrowing from the Ballads

The series also recreated famous scenes of the Robin Hood legend. "Dead or Alive" is an expanded version of Little John's origin and while there's some class warfare allusion, it still includes the traditional quarterstaff duel.

"Maid Marian" has Marian disguising herself as a boy, just as in the ballad. In "A Guest for the Gallows", Robin disguises himself as a butcher in order to rescue Will Stutely (and thereby combining the plot of two ballads).

The classic ballad A Gest of Robyn Hood provided material for a few episodes. "The Knight Who Came to Dinner" deals with Sir Richard's debt to a corrupt abbot, and "The Challenge" features both the archery tournament and an attack on Sir Richard's castle.

The series was pruned down, like the spare narrative of the early ballads, and there was almost no plot decoration or elaboration; the feel of the early black and white drama had just the spare impersonal character of the earlier ballads.

Another thing contributed to that ballad feeling. The early episodes began with bits of doggerel song that summarized the plot, and often spoiled the ending. But the music that everyone remembers -- even those born long after the original transmission -- is the song which played over the closing credits. (Youcan see the lyrics below.)

If you'd like to go more in-depth on an episode, I wrote a spotlight on the show's Christmas episode. Click here to read a reivew of 1957 episode "A Christmas Goose".

Lyrics to The Adventures of Robin Hood Theme Song

This tune was later recycled as the song of that hapless highwayman "Dennis Moore" from the Monty Python sketch. Some Canadians might also recognize this theme for its appearance in the TV commercials for Robin Hood Flour or for its appearance in the 2002 production of Robin Hood: A Merry Family Musical. An extended version of the theme played over scenes of US President George W. Bush in Oliver Stone's 2008 biopic W.

Subsequent recordings have added verses, but here are the lyrics used at the end of each episode.

He called the greatest archers to a tavern on the green.
They vowed to help the people of the king.
They handled all the trouble on the English country scene,
And still found plenty of time to sing

Continue on the next sections

This is only the second page in a multi-part article.

Or go back to:

Check out the following: