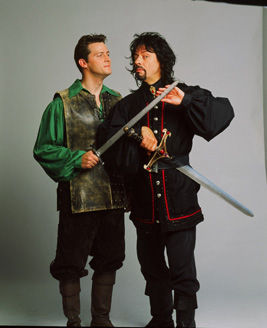 One of the best known English holiday traditions is that of a Christmas pantomime -- or panto. Since 1996, actor/producer Ross Petty has made pantos a Canadian tradition as well. For those of you who aren't familiar with the medium, pantomimes are productions for children and their parents that include singing, dancing, slapstick for the kids, pop culture and political asides for the adults, and a complete shattering of the fourth wall. These characters talk to the audience, and the audience talks back to them.

In a way, panto is responsible for this website. One of the first versions of Robin Hood I remember shared much in common with pantos (and you can read about that one here), and I've been interested in the legend ever since.

This Spotlight mainly focuses on the 2002 production, but it does also refer to Petty's 1996 staging of Robin Hood, which became a TV special in 1997.

The Plot and the Songs

The plot is relatively simple, cobbled together from both panto and Robin Hood tradition. With King Richard away from England, the evil sheriff rules Nottingham with an iron fist. When Maid Marian and her Nurse Tickle come to town, the sheriff plans to either kill or marry Marian to gain her vast inheritance. Fortunately, both women have met a good fairy and she leads them to Robin Hood, outlaw defender of the poor. Robin and Marian fall in love. Nurse Tickle serves everyone "Oil of Bleauagh!" Oh, there's a sword fight or two, some disguises, a couple of kindappings, and an evil wizard who forces the Merry Men to do a Riverdance routine. (Perhaps that explains Robin Hood's role in the movie Shrek.) And it ends with a visit from someone who is not unfamiliar to the Robin Hood legend.

But the plot isn't the only familiar element. The songs have been recycled from other shows. The opening number is "Robin Hood, Robin Hood, Riding Through the Glen", the theme from the 1950s TV series starring Richard Greene. The outlaw band performs the song three times, waiting for Robin to arrive. (Perhaps he was waiting for the second verse, which the production never uses.) And it appears several times afterwards. Even my fondness of this song wore thin after a while.

Other musical numbers include "When I Fall In Love, It Will Be Forever" (by Edward Haymans and Victor Young) and "I Talk to Trees" (from Paint Your Wagon by Alan Jay Lerner and Frederick Loewe) as romantic numbers. The big power ballad -- "Into the Fire" -- has been pilfered from fellow swashbuckler, the Scarlet Pimpernel's recent musical by Frank Wildhorn and Nan Knighton. ("This is the Moment" from an earlier Wildhorn musical performed the same function in the 1996 panto.) Most of the songs seem haphazardly thrown together, with little apparent rhyme or reason for their inclusion other than pantos must have songs. The most entertaining songs were snippets played amidst the magical duels and the like -- such as "I Got You, Babe", "Anything You Can Do, I Can Do Better" and Chicago's (the Fosse musical, not the rock band) "Razzle Dazzle".

Mercifully, the production did not borrow any songs from Twang!!, Lionel Bart's failed Robin Hood musical -- considered (rightly) to be one of the worst musicals of all time. Anyone could create a better Robin Hood musical, and it's a pity that this panto didn't attempt to include some original songs.

Graham Abbey makes a pleasant enough Robin Hood, but really that's all the script allows him to be. Pleasant and boy-scout heroic. Abbey did injure his tendon before opening night performance and so he didn't have a chance to swash his buckler as much as the script originally called for. But then, I don't think it is truly action that this Robin Hood is lacking. What he lacks is what Stephen Knight calls trickster vitality. True, Robin does engage in some classic disguises (an old woman as in the ballad Robin Hood and the Bishop and homage-named Geiser of Gisborne at the archery contest.) But rather than a form of natural justice, Robin is merely normal society in exile -- Uncle Robin, as this version of hero has been called. I feel like something has been lost in the legend, but what do I know? When asked who their favourite character was, most of the kids said Robin.

It's probably treason for a Robin Hood webmaster to admit this, but I was really rooting for the bad guys (which in pantos take the form of boos and hisses, not applause). This won't come as any surprise to the adults who have been to a pantomime. The bad guys almost always steal the show. Their comments are the most cutting, they break the fourth wall the most, and there's a genuine sense of enjoyment from them. That tricksterish, anti-authoritarian spirit that was once Robin's, now belongs to villains.

There are 2.5 bad guys in this production (1.5 in the 1996 version). The head bad guy is, naturally, the Sheriff of Nottingham played by Ross Petty, the show's producer and guiding force. Petty's sheriff borrows his dress sense and demeanour straight from Alan Rickman's sheriff in Prince of Thieves. (A sort of quid pro quo as Rickman was essentially playing a panto bad guy.) In one of his first scenes, the sheriff establishes his draconian rules. "No cellphones.... during my scenes. Make all the calls you want when someone else is on stage." A veteran panto actor/producer, Petty knows exactly how to get the audience to boo and hiss.

Then, there's the .5 villain, Simon Bradbury as the seemingly dimwitted lackey Pinch. I was happy to see Bradbury mentioned in the 2002 publicity poster, because he was my favourite part of the earlier production. His character holds some delightful surprises -- at least, for those who haven't seen the 1996 version. In particular, I remember the scene where the sheriff recruits Pinch to be pretty much unchanged from the show's earlier incarnation.

While Petty and Bradbury are veterans, a newcomer (both actor and character) to the 2002 version is Rex Harrington, straight from the National Ballet of Canada. As the Bad Wizard (or "Bad Fairy" as the children of the audience quickly dubbed him, despite the cast's corrections), he dances beautifully across the stage, but more surprisingly delivers bilious bon mots with the best of them. There's a spark every time Harrington appears, which is not nearly as often as he should. When asked who his character is supposed to be, the Wizard declares "If you have to ask, you haven't been to my website recently!" Evil wizards may seem to be straight out of the 80s TV show, Robin of Sherwood, but they've been popping up in Robin Hood pantos since the 1800s.

Two more stock characters from panto tradition are the Good Fairy (like godmothers of other pantos) and the Dame, called here Nurse Tickle. Sara Topham plays Harrington's opposite numbers, and they duel with both magic and musical numbers (such as "Anything You Can Do, I Can Do Better" from Annie Get Your Gun). But there's some sizzle in these characters as they go from waltzes to tangos. The whole "spirit of the forest" thing is a bit on the saccharine side for this grumpy grown-up, but Topham does fairly well. (Karen Kain -- Ross Petty's wife and former ballet partner of Harrington -- played the role in 1996.)

As for Nurse Tickle, Nora McLellan is a surprising although entertaining choice -- that's because she's a woman. Traditionally, the part of the dame is played by a fella. (In the 19th century, Robin Hood, the Sheriff and Alan a Dale were all played by women in pantos.)

After them, there's not much left for the Merry Men to do. Marian (Amy Walsh) is, naturally, the love interest and a damsel in distress, but also thankfully she does don the lincoln green and join the band. The other Merry Men don't even merit mention in the show's publicity material. Tuck gets a few more lines as the sheriff's chaplain who is more than happy to switch sides. But Little John, Will Scarlet and Alan a Dale share only a few lines and are not much different from generic Merry Men 1 or 2. Scarlet faired better in the 1996 where he was portrayed by ballet dancer Frank Augustyn. But here it is Harrington's bad wizard who supplies the dance and romantic interaction with the good fairy.

Robin Hood -- The Merry Family Musical, is like most pantos, a real mixed bag. Some of the gags -- like the Sheriff and Pinch hiding in Nurse Tickle's mirror -- or chase scenes are real classics for the kids (stock elements of both panto and Scooby-Doo cartoons). Then, there are the comments for adults -- references to Labatt's Blue (bland Canadian beer), the premier's hair, the mayor's computer scandal, GST -- Greedy Sheriff's Tax (medieval ancestor of our own Goods and Services Tax). There are little asides about their well-known acting careers -- "You're chewing more scenery here than you did at Shaw." Most of that stuff works. But at other points, it does slow down. I can't imagine the point of the ghost in the haunted castle -- but hey, it did get a reaction from the kids. And I am about 25 years older than the target audience for such japes.

The 1996 version of the panto also starred Petty and Bradbury in the same roles, and also featured Don Chameroy as Robin Hood, June Crowley as Marian and Kevin Durand as Little John. Durand would go on to play Little John again, opposite Russell Crowe's Robin Hood in 2010 film. Although I found the 1996 production entertaining as a TV special, the true magic in a panto is being a part of it. Shouting "Oh no, it isn't" or booing the sheriff or singing the Robin Hood song (and being fully prepared to sing the next verse without the aid of any lyric sheets). It appeals to the big kid in me, and to the little kid in the smaller members of the audience.

Ross Petty Productions produced another Robin Hood panto in 2009 where it was refashioned as an "EnvironMENTAL" Family Musical. And in 2019 they tackled Robin Hood characters again in Lil' Red Robin Hood.