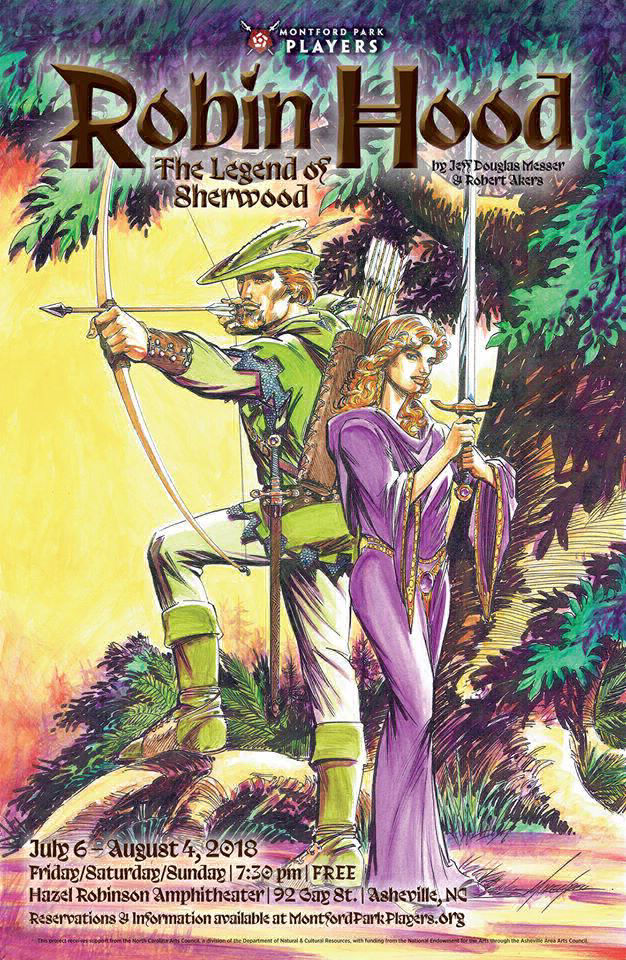 When I first wrote this Spotlight, I said it was proof that I take requests.

Robin Hood -- The Legend of Sherwood opened in Waynesville, North Carolina on May 5, 2000. (My birthday) It was one of the biggest theatrical productions in western North Carolina ever.

Since that early production, the play has been performed many times, and was shortened -- with a part of the play becoming its sequel

Facebook page for Robin Hood: The Legend of Sherwood

[When I first reviewed the play I was tentative in my conclusions. Having seen the 2018 version of the play on YouTube, my feelings are far more positive than you'll find here. The magic that comes from live theatre were evident from watching the video.]

The backdrop paintings displayed on their website look impressive, as do the photos of the arms and armour.

I wish I could comment more about other aspects of the production. For example, I have no idea what the actors will be like. And a Robin Hood film or play often succeeds on the merits of the man playing Robin Hood.

But since the production is a month away and in another country, I can't really give a full evaluation. Still I have the script, and that will have to do.

The 2000 cast of Robin Hood: The Legend of Sherwood 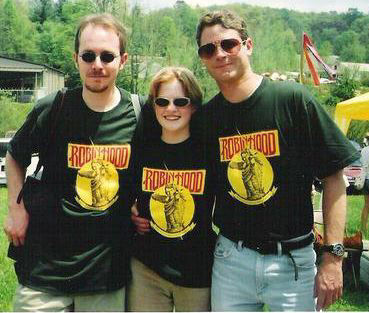 Akers and Messer have incorporated most of the elements that should be in a Robin Hood play. There's action, danger, excitement, romance, swordfights, archery contests, ambushes, disguises and of course, humour.

There's a lot of humour in the Robin Hood legend, and the writers realize that -- especially in the scenes with Gisbourne's repeated attempts to travel through Sherwood. There's also a few darker moments where the characters question their actions.

[One of the things that's much clearer from the YouTube videos is how the humour and action resonates with audiences.] 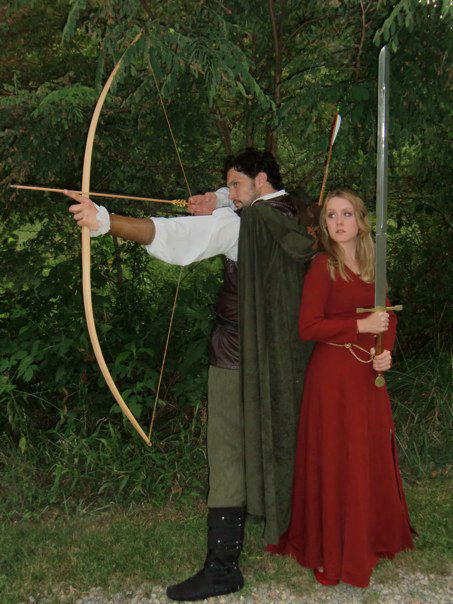 Robin and Marian in the 2011 production 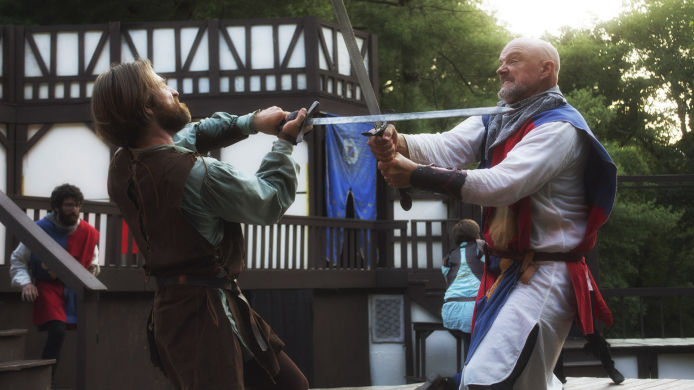 An action scene in the 2018 production

Something Familiar, Something Peculiar

One of the main problems in the script is that it is too dependant on its source material. There are moments that come a little too close for comfort to scenes in Errol Flynn's The Adventures of Robin Hood, the Robin of Sherwood (called just Robin Hood in the US) TV series and Robin Hood -- Prince of Thieves. This is not to say it's wrong to have influences, all the sources I just mentioned borrowed from earlier versions too. But what Flynn's movie and Robin of Sherwood did was to take their sources and create something that rose above them. Robin Hood -- The Legend of Sherwood doesn't really seem to have anything new to say. It just seems like a collection of things that other people have done. It's safe, fun and reliable, but I don't think it takes enough risks to be a truly great addition to the Robin Hood legend.

Another problem is that a lot of the dialogue is clunky and overwritten. For example, two of the Merry Men are killed in an attack and afterwards the Merry Men squabble about unneccesary risks. Robin's often prone to making inspirational speeches in books, films and other plays. But in this scene, Little John, Will Scarlett and Robin all shout speeches at each other. The scene would have been much more effective with some pruning. (Although then it would have resembled an argument in "Robin Hood and The Sorcerer" that much more closely.) Akers and Messer did reveal (through a speech, not dialogue alas) an interesting facet of Little John's personality and history though.

The villians are a bit too blandly evil for my tastes, but then that's part of a tradition. It might be a tad redundant to have three incompetent bad guys -- the Sheriff, Sir Guy and Prince John. The smartest bad guy isn't a guy at all -- it's the sheriff's wife, Gertrude.

Marian's the cloistered lady, acting as a spy for the outlaws, as she is in the Flynn movie as in other sources. But Ellen, Alan a Dale's wife, is somewhat feisty and can shoot as well as the other Merry Men. Also in the band is Anna, a woman who has an unrequited crush on Robin.

The script certainly has its faults, but as I said earlier it has good points as well.

Again, just reviewing a script is a problem. Where this play has the best chance of succeeding are things that happen on the stage rather than the page. The swordfights and like will seem more fun and exciting when performed live. The rehearsal photos of the fight choregraphy looks very promising.

Also, if the Robin Hood is charsimatic enough the usual speeches about freedom could come alive.

I would be interested in seeing this play to see how it works out on stage.

And it does my heart good to see Robin Hood getting this kind of attention.

[I can't say I like my review very much, looking at it nearly 20 years later. One day I'll rewrite this in full -- comparing the texts, talking about the performance, etc.]

Buy Mike Grell: Life Is Drawing Without An Eraser (Limited Edition) on Amazon.co.uk

Buy Mike Grell: Life Is Drawing Without An Eraser (Limited Edition) on Amazon.ca