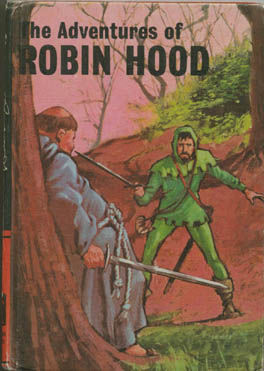 In the last five years, I figure I've written hundreds of pages for this website. An effort like that requires passion. And I've been passionate about Robin Hood since my childhood. I saw a pantomime and a few movies about Robin; Rocket Robin Hood was always on TV and I had two Robin Hood books. Those books still have a proud place on my shelf. One was a gift from my parents, and another slightly later one was purchased at a school book sale. To be honest, at this point, I'm not sure which book I read first. I think it was this one though. ( The other book, by Major Charles Gilson , is also featured this month.)

This book (which is simply called Robin Hood everywhere but the front cover) was number 37 in a line of Bancroft Classics which included No. 1 Gulliver's Travels, No. 18 Ivanhoe, No. 31 Jane Eyre and finally 48. The Pilgrim's Progress. Unfortunately, unlike those other books, I don't know who wrote this volume. But whomever he or she is, that person is partly responsible for the existence of this website.

So, what did I remember about this clearly formative book? Well, Robin Hood was in it, and Marion, Little John, Friar Tuck, Will Scarlet, Allan-A-Dale and the Sheriff of Nottingham. There was a quarterstaff duel or two. Something about Tuck carrying Robin across the water. A bit about Tuck being upset that a fake hermit was eating meat on a Friday (as an inattentive Protestant, I do remember having to ask my mom about that one).

And well ... other than whole fish and Friday business, nothing at all distinctive that wouldn't have also come from the other Robin Hood stories I encountered back then. Hey, this was 25 years ago! (Or it was 25 years ago when I first wrote those words ... it's been much longer now.)

Summary of the Book

The first chapter begins with the elopement of the half-Saxon, half-Norman William Fitzooth and Joanna, daughter of Sir George Gamwell (whose family troubles, the great time waster of many a Robin Hood book are thankfully not recounted here). The happy couple have a son named Robert Fitzooth, called Robin Hood by his grandfather. Then the action jumps to Robin's adulthood. Robin's support of King Richard and interfering ways offend Jeremy Cramp and the Sheriff of Nottingham. So, Robin the earl of Huntingdon is outlawed at his wedding to Marion Fitzwalter.

The newly-proclaimed outlaw heads to Sherwood Forest, along with Marion and Will Scarlet. They assemble a band to steal from the rich tax gatherers and give to the poor. Among those who join the Merry Men are John Little, Friar Michael Tuck, Martin Much, Allan-A-Dale and his bride Lorna Demaine, George-A-Green and his wife Betriss, the magician Wellenough and Rough the Woodsman. In meeting Rough, Robin gains a magical horn to summon his outlaw companions. Later, Robin encounters Blondel, King Richard's minstrel. King Richard has been imprisoned in Austria and is being held for ransom. Robin helps to raise the ransom and thwart Prince John's plans for the throne.

Besides Prince John and the sheriff, our heroes face the evil Bishop of Peterborough, Worman -- formerly a servant of Robin's now working for the bishop --, a witch, Desmond of Gisborne and his worst of all, Desmond's cousin Sir Guy of Gisborne. Gisborne leads an ambush which kills several of the Merry Men, including Will Scarlet. In retaliation, Robin beheads Gisborne and kills the sheriff.

Robin also participates in an archery competition at Ashby-De-La-Zouche, where he encounters (in crossover cameos from a fellow Bancroft Classic) Sir Wilfred of Ivanhoe, Sir Brian Bois-Gilbert and the Black Knight, who is secretly King Richard. Richard is restored to his throne and all is made right -- for a while. While Robin and Marion stay in England to have five children, many of the outlaws join Richard in France. Eventually, Richard is killed and John takes the throne. Then, as in the old ballads, Robin is wounded and taken to Kirkleys Priory to be healed. The prioress betrays Robin and he dies, firing a final arrow to mark his grave.

Many years later, the new king Henry III meets Friar Tuck who tells him how Marion became the new Prioress after the evil one's death, Little John went to Ireland and then returned to die in Hathersage. Tuck says "There is one good thing about this old world of ours. No matter who you lose in death, there is always somebody else coming along to be loved. Robin's children, and now a new young King, for example." Henry promises to visit Tuck again.

Well, you may well recognize some of those plot elements. I certainly do. There's a lot from the old ballads, villains from the plays of Munday and Jonson, crossover scenes with Sir Walter Scott's Ivanhoe, a touch of Tennyson, part of Peacock and a nudge of Noyes's play. I don't know when this book was first written (presumably 1968), but Roger Lancelyn Green used most of the same elements and in roughly the same order in his classic 1956 children's novel of the same title. Green's book was longer and his style was brisker, and so there are many things missing that were in Green -- most notably Robin's encounter with a butcher and the Sir Richard of the Lee story from the early and influential ballad A Gest of Robyn Hood.

But there are characters who are not in Roger Lancelyn Green's version who appear and disappear in this book -- like Desmond of Gisborne, Wellenough and Jeremy Cramp. I suspect that this unknown author is borrowing them from somewhere else. If anyone has some ideas about such source material, I'd be interested to hear them.

It's hard for me to judge the book on its own merits. Obviously I like many of the classic stories retold here. And the style is, while a bit long-winded, not too bad. Characters do tend to speak in exposition though, like:

We are grateful to you for saving us from death, but it was the least that could be done after the trick that was played on us; a trick that nearly cost us our lives. Getting us to take false coins to the Sheriff; and stealing our trees and the horses and dray from us! But that is over and done with now, and the sooner the stage coach comes along, the better we shall be pleased.

It's uninteresting dialogue in the extreme, but at least it's not the tedious mock-medieval language found in Howard Pyle's book. [Now here's a place where my opinions have definitely changed since I first wrote this article. While I'm not generally a fan of mock-medieval dialogue, Pyle's storytelling skills are masterful. This casual diss of Pyle was uncalled for.]

Marion and the Merry Men

And unlike Pyle, Marion is present and accounted for. Unlike Green's book, and Thomas Love Peacock before him, Robin and Marion's wedding ceremony is completed early on and Marion goes the band from the beginning.

Unfortunately, she usually just does the cooking and cleaning. Robin even refuses to allow her to be a decoy. Tuck assures Robin that Marion doesn't have to be involved at all, and fellow outlaw Simon Trim disguises himself as Marian.

But towards the end of the book, Marion is trapped in a bear pit. She wounds Prince John with a knife and attacks the new sheriff with a sword. (As it's at odds with her portrayal elsewhere in the book, I suspect this is another borrowing.)

One of the recurring themes in Robin Hood ballads is "Robin Hood meets his match". But here, Robin does fairly well. A branch trips him and Little John in the famous quarterstaff duel. Robin throws Tuck into the water (usually its the reverse) and they fight to a standstill. And finally Robin beats George-A-Green. In the ballads, Robin fared a lot worse.

Violence in a Children's Book

In the beginning, Robin seemed to play harmless tricks on people. This book didn't use the story of him killing fifteen foresters. And I fully expected to report that the ballad violence had been bowdlerized.

Boy, was I wrong! Robin kills quite casually here, and straight out of the ballads, he drives a sword into Gisborne's skull and then beheads him.

The Bishop was staring about him in terror, his face livid, his eyes flickering round as he observed the dead men that had been his own soldiers. Then he said, "Some of these men are only young boys, and some of the others have wives and children. I am responsible for sending them to their deaths. All this was my idea. Oh, what have I done? Many times I have been behind the Sheriff and his schemes, but I never realised until now what such a battle could be like. All this death! Oh, God forgive me."

Robin motioned to his escort, and they turned and left the Bishop with his dead ... and his conscience.

Hang on. What about Robin Hood's conscience? After all, he killed those men -- sometimes unnecessarily. Beheadings, arrows in the back, knives in the heart, hangmen "as dead as mutton". I wonder if my mother knew what violence she was exposing her son to.

Oh, and there's something else. Now, I know all too well about the demon that is a typo. But there's a typo in this book worth pointing out.

"As you may have guessed by now," said Blondel with a smile, I have come to bed for money; the ransom money."

I assume that the writer meant "beg". Then again, given some other depictions of Blondel, I can't be entirely certain. Still I can't imagine them implying something else in a late 1960s children's novel.

I think I'll not mention that typo and the gratuitous violence to my mom. She seemed shocked and guilty enough recently when I told her that she bought the book that helped to start my Robin Hood obsession.

Where to find the Bancroft Classics Robin Hood

While the Bancroft Classics edition of Robin Hood is not in print any longer and hard to come by, there is an alternative book of a similar style that remains in print.

THE ADVENTURES OF ROBIN HOOD by Roger Lancelyn Green. This classic children's book from the 1950s incorporates Robin Hood stories from ballads, plays and novels into series of rollicking tales.
Buy it on Amazon.com

Buy it on Amazon.co.uk

Buy it on Amazon.ca