The Adventures of Robin Hood
by Major Charles Gilson 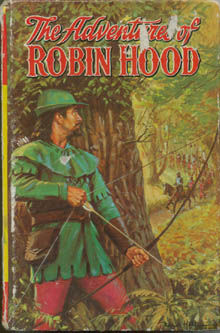 [Some editions are titled Robin of Sherwood]

This month I explore two of the Robin Hood books that I've owned since childhood. (The other Spotlight, covering No. 37 of the Bancroft Classics line, can be found here .) I'm not quite sure which of these books I read first, although I suspect this is the second Robin Hood book that I read. I believe it was bought at a school book sale, and I notice that my name -- minus my trademark middle initial -- is enscribed on the inside cover in my mother's handwriting. Fortunately, unlike that other book from my childhood, the author's name is also printed on the book -- Major Charles Gilson.

My childhood copy of the book has an impression date of 1974, and is published by Children's Press. But looking at the catalogue for the International Robin Hood Exhibition, I see that the original publication date was 1940.

A few years back, I picked up another copy of Gilson's book. Whereas the only illustration on my 1974 edition was the front cover, this larger book had many black-and-white illustrations and some colour plates.

Although in the book Robin is described as "Fair and bearded as a Saxon should be," the illustrations depict a dark-haired outlaw. In the larger book, he looks suspiciously like Errol Flynn, not surprising as the frontispiece is copied almost directly from a photo also used as a cover on some video editions of the classic 1938 film.

The version with the Flynn-like illustrations also contains some paragraphs not found in my childhood copy. For example, it reveals that Hereward and Robin Hood are on the same family tree.

Summary of the Book

The story begins with a brief overview of the Norman conquest and post-conquest politics. Sir Robert de Braisse-Neuve also called "Robert the Wolf" or "le Loup" controls most of Sherwood Forest from his mighty fortress in Normanton. He plans to align with Prince John and seize control of England during King Richard's absence. However, the thane Alfred of Sherwood does not support him. So, the Wolf -- aided by fellow Norman bad guys, Sir Stephen de Froy, Sir Geoffrey Malpert and the sheriff of Nottingham, Master Ronald Hamnett -- attacks Alfred's castle at Newstead and kills the thane. Alfred's daughter Marian is kidnapped and is promised in marriage to Sir Stephen de Froy. Meanwhile, Alfred's son Robin (yes, Marian's brother in this telling) and faithful members of the household flee to the greenwood.

As Robin Hood, the late thane's son begins his outlaw life. He rescues the captured Little John, prevents Marian's wedding to Sir Stephen and instead she is married to Allen-a-Dale (who from this tale hails from Barnesdale, hence the Dale part of his name). Little John goes to Nottingham and enters the sheriff's service. In the guise of potters, Robin and his men rob the sheriff's household and then trick the sheriff into a forest ambush. They also capture the Bishop of Hereford, but then protect the bishop from the cutpurse and cutthroat Guy of Gisborne.

Then King Richard returns disguised as the Black Knight. The king helps the outlaws retake the remains of Newstead castle, which were being held by Sir Stephen. And then Robin becomes the king's lieutenant as the king prepares to lay seige to the mighty fortress of Normanton. The Wolf is defeated and killed. But although Robin has won pardon for him and his men, he hears the call of the greenwood and does not give up his forest ways.

The tension between Norman and Saxons has been a major theme in the legend since Ivanhoe. And sometimes the pro-Saxon rhetoric can seem a little ... unsettling. The first and last paragraphs help frame some of the racial politics in the book.

When Duke William of Normandy conquered and slew King Harold at Senlac, the England that we know to-day had even then been for centuries in the making. For he who calls himself British may belong to a so-called mongrel race; but it is to be remembered that the blood that flows in his veins is that of many conquering adventurers who, one after the other, thought these islands well worthy of winning.

For thus, as we said in the beginning of our story, was our England formed and moulded; and thus, because of the deeds of which we have now told, does Robin Hood, even to this day, stand for something that is English.

I don't think I'd describe this book as racist, but from first paragraph to last, there are little bits that make me uncomfortable. On the other hand, when Thane Alfred perceives even his hounds as Saxons, it becomes somewhat comic.

It's also unusual that as King Richard is largely Norman, he is very clearly described as the lesser of two evils. His warrior virtues are praised, but it's hardly the ringing endorsement found in some Robin Hood stories.

Another obvious departure from the classic Robin Hood tales is to focus on a new Norman villain. The Bishop of Hereward is actually rescued by Robin, and grows to respect the outlaw. The sheriff is a minor lackey. And the "Wolf" doesn't think much of Prince John either.

Then, of course, there is Marian as Robin's brother. I'm actually quite fond of the cross-dressing fighter Marian is for part of the book, but she appears to fade from sight later on.

But the story does incorporate many classic tales, and it looks to the earliest traditions by including Yorkshire locations like Barnsdale (Barnesdale) as well as the more familiar Nottinghamshire ones.

I wouldn't call this a great book -- perhaps not even a good one -- but it was an interesting and strange experience to revisit it after so many years.

Robert the Wolf is the primary antagonist in the 1950s comic strip Robin Hood and His Merry Men by Clifford Makins and Frank Bellamy which appeared in weekly installments in the Swift comic magazine. The opening installments feature the destruction of Newstead Tower and the deathof Robert's father Alfred (although now the Earl of Huntingdon).

Buy a used copy of Gilson's Adventures of Robin Hood on Amazon.com

Buy a used copy of Major Charles Gilson's The Adventures of Robin Hood on Amazon.ca

FRANK BELLAMY'S ROBIN HOOD: THE COMPLETE ADVENTURES by Frank Bellamy and Clifford Makins (edited by Steve Holland). Book Palace's 2008 compilation of Robin Hood and his Merry Men and Robin Hood and Maid Marian which originally appeared in two-page weekly installments in the Swift comic (a junior companion to the Eagle) in 1956 and 1957. This comic book series borrows elements from Major Charles Gilson's novel.
Buy Frank Bellamy's Robin Hood: The Complete Adventures on Amazon.com