The Outlaws of Sherwood
by Robin McKinley 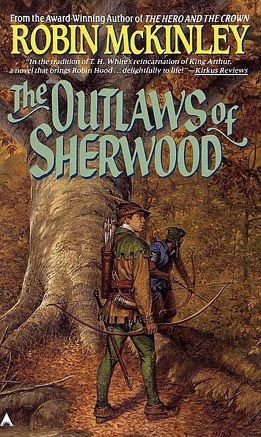 On his way to Nottingham Fair, a young apprentice forester named Robin is accosted by some of his fellow foresters. Forced to flee, Robin shoots some arrows in self-defence at his attackers. One forester is accidentally killed. Robin is outlawed is outlawed for his crimes. He comes to live in Sherwood Forest and assembles a gang of "honest outlaws" to plunder rich travellers and give some comfort to the poorer Saxons. Among his band are Marian, Will Scarlet, Little John and Friar Tuck. The outlaws rescue Alan-a-Dale's bride from an unwanted marriage and help the friendly knight, Sir Richard of the Lea, repay a loan and recover his lands. The outlaws make enemies of the Sheriff of Nottingham, and the sheriff hires a bounty hunter named Guy of Gisbourne to eliminate Robin and his outlaw band. And finally, Robin wonders what will happen when the long-absent King Richard returns to Sherwood.

More than a Straight Re-telling

Summarized that way, it's easy to see why Stephen Knight has described Robin McKinley's book as a "straight re-telling". But such a summary, while accurate in the broad strokes, does not do The Outlaws of Sherwood justice.

In the classic legend, Robin Hood is a superlative archer. Here, Robin is outlawed because he shot the forester in the heart with an arrow intended for his foe's leg. Robin even tells one of his outlaw band: "you pass the basic requirement, which is to be a better archer than your leader ... Come now, that's the most open secret here, that I am the worst archer of us all."

This change is a sign of McKinley's love of "ordinary heroes". But Robin's inability to split a willow wand or opponent's arrow at ludicrous distances is not the most important change in Robin's character or the biggest example of him being an ordinary hero. Traditionally, Robin is a trickster -- someone who might care very much about the poor that he helps, but seems to care little for the troubles that affect him. McKinley's Robin Hood, however, is a (justified) worrywart -- and a very charming one at that. His often repeated slogan is that various things like philosophies "do not keep the rain out".

In the classic legend from the Gest to Errol Flynn, Robin Hood eagerly risks life and limb to shoot for the prize of a golden and/or silver arrow, clearly knowing that the archery contest is the sheriff's trap. But here, Robin has a somewhat different reaction.

Robin sighted along the shaft of his new arrow. "So?"

Marian smiled. "So the outlaws of Sherwood, renowned, as they are, for their archery, cannot possibly stay away from such a contest."

"Why not?" said Robin, genuinely surprised.

"Why, for the golden arrow," said Marian.

"Golden arrow? And what would we do with a golden arrow? Give it to Alan for a lute-string? I could hang it around my neck on a chain, perhaps, and let it stab me in the ribs when I tried to sit."

"And your honour as an outlaw?" Marian suggested.

Robin set down his arrow and laughed. "My honour as an outlaw concerns staying alive; and presenting my neck anywhere near the sheriff of Nottingham, who feels it wants lengthening, did he recognize it, runs directly counter to that honour. Besides, you know I can't shoot a pig's sneeze."

Robin seems very aware with the negative consequences that come with the sort of life that he leads. His worrying comes from a sense of responsibility and leadership. However, Robin often seems to overlook the more positive aspects of his outlaw life. Concerned with the safety of his band, Robin often fails to see the importance that his legend has. While Robin might view himself as ordinary, he is still at the root of something extraordinary. He may not be able to shoot as far or as accurate as his legendary counterpart, but McKinley's Robin is, in his own way, still quite an extraordinary hero. Fortunately, others in his band realize this. The Merry Men provide far more than skill with the longbow. They also support Robin emotionally.

The Women of the Forest

The Outlaws of Sherwood is a very appropriate title for this book. McKinley gives much attention to the others in Robin's band of Merry Men and Women (for McKinley has added several female characters). Little John, Will Scarlet, Much, Tuck, Alan a Dale and his wife Marjorie, a mysterious lad named Cecil (whose secret is revealed elsewhere on this website) -- they all get their time to shine. And of course, Marian -- how could we forget her? Unfortunately, several writers have done just that.

In several of Marian's earliest appearances in the Robin Hood legend, she is a very capable archer and huntswoman . And in her only major ballad appearance , a disguised Marian fights Robin to a standstill. Even into the 19th century, Marian is an effective fighter, as in Thomas Love Peacock's novel Maid Marian . But in many 19th and 20th century children's books, Marian's character had been weakened into only being Robin's girlfriend with no apparent fighting skills. (One scholar has suggested that Marian's character was softened as the suffragette movement gained strength and strong woman seemed more politically threatening.) It's unfortunate that many people still think that Marian should be shy, retreating, helpless. Fortunately, McKinley's Marian is one of many modern attempts to restore some strength and vitality to the character. Yes, Marian can easily outshoot Robin (in this book -- who can't?) But again, she's far more than merely a good huntswoman. Much of the spirit, the emotional heart, of Robin's legend (within the book) comes from Marian. In terms of personality, McKinley's Marian is as strong as she's ever been -- making great personal sacrifices for the sake of the outlaws and their reputation.

Speaking of sacrifice -- in the ballads, Robin can fight with people for hours, get his skull split with blood flowing out. And still you get the impression that he's never really hurt. After seeing too many action movies with rapid recoveries, it's a relief to see that McKinley knows there are other possible outcomes to swordplay than just dramatic deaths or nice-looking, fast-healing and unimportant scars.

McKinley's book is a well-written, highly readable tale which is (mercifully) not written in the pseudo-medieval English of some Robin Hood books. It's worth reading this book to see her fresh approach to the characters, and to encounter characters unique to this book -- such as Cecil -- who make you wish they'd always been a part of the legend.

My only real criticism is the very, very end of the book. Not the part that Robin McKinley describes in her interview as being the hardest part to write. I mean the last few pages. People familiar with the book might wonder why, as it reflects something that's been part of the Robin Hood tradition from the Gest on down. Well, the Gest resolves this matter in a way lost on most later versions -- and those later re-tellings also trouble me. (I will discuss this subject in a future spotlight.) Plus, there's my personal reaction to a certain historical event (and contemporary parallels) that colours my response to the ending. The ending really bothered me when I first read the book in 1989, but less so now. I can see that the tone is not so upbeat as to make such an ending truly insufferable.

Of course, my unease could be resolved with an Outlaws Part Two. It would be nice to see more of Cecil again.

THE OUTLAWS OF SHERWOOD by Robin McKinley. A retelling of the Robin Hood stories for both young adults and grown ups. It has some nice twists on the classic legend. For example Robin Hood is the worst archer of the Merry Men.  It also features strongly devolped female characters.
Buy The Outlaws of Sherwood on Amazon.com

Buy The Outlaws of Sherwood on Amazon.co.uk

Buy The Outlaws of Sherwood on Amazon.ca