Friar Tuck and the Christmas Devil
by Steven A. McKay 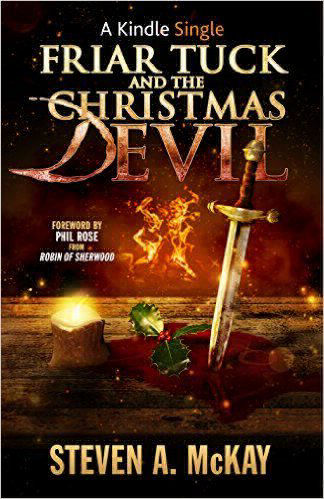 In 2013 Steven A. McKay published Wolf’s Head, a Robin Hood novel set it the 14th century. It was a self-publishing smash hit, and three more novels in the Forest Lord series followed – The Wolf and the Raven (2014), Rise of the Wolf (2015) and Blood of the Wolf (2016). Also, McKay has published a number of novellas and short stories – side tales set around the Forest Lord universe.

Friar Tuck and the Christmas Devil is the second of the novellas, and it takes place between the third and fourth novel. It is largely a standalone tale that requires no prior knowledge of the Forest Lord series, nor does it spoil much of the other novels.

It is part mystery, part adventure – but most of all, it’s a Christmas story.

The villagers of Brandesburton in the East Riding of Yorkshire have had their holiday preparations disrupted by a series of strange robberies. Most of the crimes have been petty – except for the nature of the perpetrator. It appears the Devil himself has come to Brandesburton. Witnesses report seeing strange figures with horns. And they’ve found cloven footprints in the snow.

This combination of robbery and devilry attracts the attention of a recently arrived resident to the village – Brother Michael. At least that’s what he generally calls himself. Most of the residents have figured out that he’s really Friar Tuck – one of Robin Hood’s band of outlaws. Robin Hood’s gang were pardoned by the Sheriff of Nottingham and Yorkshire in Rise of the Wolf, but Tuck’s powerful enemies in the church are less forgiving. So, the Franciscan friar has come to Brandesburton to hide out with the local priest, Father Nicholas de Nottingham – a friend and ally from his outlaw days.

Tuck finds that he needs all his skills to solve these purportedly demonic incidents – his priestly insight and compassion, his fighting skills as a wrestler and an outlaw’s sense of justice – helping those truly in need and not just enforcing the law.

If anyone could stand against a demon, it was Friar Tuck. Still, something seemed odd about the whole affair to the priest.

“Why are you so interested in this, Tuck?” he asked. “This is a job for the bailiff or the reeve, not a visiting friar.”

The Franciscan didn’t answer immediately. He wasn’t quite sure himself why this mystery had so consumed his thoughts recently, but that strange glint of light that had drawn his attention to the hoofprint in Ivor’s house played on his mind. “Who knows?” he finally replied. “I just feel like something’s guiding me to solve this. Someone, or some thing perhaps, needs our help.”

Father de Nottingham shrugged in resignation. So be it.

The Spirit of Christmas

This adventure takes place at Christmastime – far removed from the eternal spring/summer of much of the Robin Hood cycle. (That said, many stories do touch upon Christmas at least.) McKay has taken advantage of the period setting to weave in many details of the medieval Christmas traditions. McKay gives Friar Tuck the credit for the creation of one genuine medieval Christmas carol.

But for all the hearthstone pies and Wassailing, the true aspect of Christmas in the novel is the sense of compassion and mercy. Tuck and also many of the villagers of Brandesburton act in the spirit of forgiveness that reflects the annunciation to the shepherds – to use the now-disputed King James translation: “and on earth peace, good will toward men.”

Friar Tuck’s sense of mercy brings to mind the most famous of Christmas detective stories, "The Adventure of the Blue Carbuncle" by Sir Arthur Conan Doyle. There, Sherlock Holmes also showed mercy and noted “it is the season of forgiveness.” Friar Tuck and the Christmas Devil is a fine addition to the literary tradition of Mr. Sherlock Holmes of Baker Street as much as it is to the tradition of Robin Hood of Barnsdale.

There’s a touch of an outlaw to Sherlock Holmes too, who as he tells Dr. Watson is “not retained by the police to supply their deficiencies.” And for his bit, Tuck has many of the same skills as the Great Detective. He’s well-read (as Holmes proved himself to be, despite Watson’s famous initial assessment), well-travelled, a master wrestler, a doughty fighter and possesses an instinct for justice. Clayton Emery has written a series of short stories with Robin and Marian solving mysteries, and yet I feel like it’s a better fit for Friar Tuck.

I wish I could be less vague about some aspects of the tale. Some of its more notable features lay outside of its mystery genre trappings. And yet I don’t feel that’s fair to the reader. If you want to see Tuck in more of a traditional British mystery, I recommend Faces of Darkness, McKay’s most recent novel. There, Little John (now a representative of the official law) joins Tuck as his Watson or perhaps Inspector Lestrade.

Part of me also wishes that McKay’s Tuck could cross over to Jennifer Ash’s superb 14th century mystery novels – The Folville Chronicles.

The novella includes an introduction by Phil Rose – Friar Tuck from the TV series of Robin of Sherwood. He recounts his own encounter with the devil in the TV episode “The Swords of Wayland”. For extra nostalgia, Rose reads his own introduction in the audiobook version.

The main audiobook story is narrated by Nick Ellsworth, the voice behind all of the Forest Lord novels. Ellsworth’s delivery is solid and engaging. His Friar Tuck is the best character voice in the run, and it’s good to see that voice get a spotlight here.

The novels, novellas and short stories are available in print, Kindle and audiobook format on Amazon. Also, you can get a free exclusive short story, The Rescue, on Steven A. McKay's website.

Buy Friar Tuck and the Christmas Devil on Amazon.co.uk

Buy Friar Tuck and the Christmas Devil on Amazon.ca

Buy Faces of Darkness on Amazon.co.uk

Buy Faces of Darkness on Amazon.ca

If you enjoyed this interview, check out the following: