Sanctuary: A Robin of Sherwood Adventure
by Paul Birch 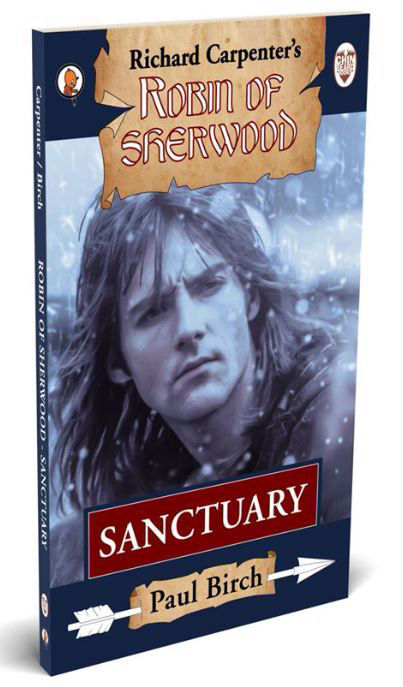 Audiobook: Spiteful Puppet, 2019
Narrated by Barnaby Eaton-Jones
Starring Michael Praed, Nickolas Grace, Andy Secombe and Daniel Abineri
Novelization: Chinbeard Books, 2019
The original Robin of Sherwood TV series ran from 1984 to 1986. It remains one of my personal favourite versions of the Robin Hood legend. In 2016 — 30 years after the show’s final episode — Spiteful Puppet released a new full cast audio drama Robin of Sherwood: The Knights of the Apocalypse reuniting the original series cast with a long-abandoned script by the TV series creator the late Richard Carpenter. Knights of the Apocalypse was a success and Spiteful Puppet went on to produce further audio adventures.

In 2017, they started releasing a series of short audiobooks read by cast members. Sanctuary by Paul Birch was released on Dec. 22, 2017 and touted as a Christmas Special, like the kind that British TV shows such as Doctor Who enjoyed on television.

Voices from the Past

There is much that is special about Sanctuary, including the return of actor Michael Praed as Robin of Loxley. In the original TV show Praed’s Loxley was killed at the end of the second series and Jason Connery’s Robert of Huntingdon became the new Hooded Man for the final series. Knights of the Apocalypse was a continuation of the original series with Connery’s Robin Hood, although Praed did make a very brief audio cameo as a spectral voice. But Sanctuary is set during shows earlier seasons — the time when Robin of Loxley was Robin Hood.

Nickolas Grace also returns to his TV role of the Sheriff of Nottingham. Joining them is Andy Secombe, best known to listeners as the voice of Watto in the Star Wars prequels as a priest. The narration is performed by Barnaby Eaton-Jones. While the other Robin of Sherwood audiobooks were read by members of the TV series cast, Eaton-Jones does not disappoint. His speaking style as engaging — perhaps more so — than the other actors. Besides as organizer of Robin of Sherwood conventions and showrunner of the new audio adventures Barnaby Eaton-Jones has truly earned his place among the luminaries of Robin of Sherwood.

Robin and the Sheriff encounter battle each other on a frozen river by a ramshackle church. They are both rescued from the chilly waters by a mad priest who hopes to make his captives repent of their ways.

Robin of Sherwood is the servant of the forest god Herne the Hunter. And Daniel Abineri, son of the late TV actor John Abineri, makes a brief appearance as Herne to read the prophecy that sets the mood of this tale :

In the Season of the Christ Child the Eel and the Wolf and the Hawk did dance a furious jig; and where one finished and the other began… no man could tell. And in that dance there was a kiss and a death and a saving but who did what to whom… no man could tell.

Reflecting on the Legend

The audiobook doesn’t quite feel like the Robin of Sherwood TV series. For one thing, the sense of youth about the original TV series is missing. Perhaps the chill the icy river could explain why Praed’s voice no longer sounds quite like it did when the actor was in his early 20s. But that’s a minor and unavoidable issue. (And other actors in different licensed audio dramas who have tried to sound drastically younger have done so with mixed results at best.) But it’s not just a matter of voice. The TV version of Robin of Loxley has often been compared to a student protest leader. The Robin of Loxley of this audiobook is more reflective, more sober even though his politics are very much in the vein of a student protester.

Some of that is due to the structure of the tale. It’s like a three-hander play. If it doesn’t quite reflect the style of TV show, it brings its own pleasurable style. And it allows for commentary on the nature of the Robin Hood story. This exchange between Robin and the Sheriff is particularly memorable.

“And what’s that?” snapped Robin. He was getting fatigued and the rope appeared to be resolute.

“Breaking the law. Is it thrilling? Does it enchant your blood and make your heart race? Is that why you do it?”

“I uphold the law. The only laws broken are those that shouldn’t have been written in the first place.”

“So, it’s not for pleasure. It’s because a coxcomb like you thinks he has the right to administer justice.”

“Someone must when you abandon it so freely.”

“You dolt! You have absolutely no idea what it means to rule. You skulk about in the forest that does not belong to you; order simpletons to rob and kill at your whimsy, and have the gall to think that you are a better representation of law and order than I am.”

The sheriff responds by listing all of his official duties — ones that the outlaws do not perform. The sheriff’s attitude betrays his sense of entitlement and many of his arguments are similar to Ayn Rand’s criticisms of the Robin Hood legend in Atlas Shrugged. But the sheriff’s subsequent comments do puncture aspects of Robin Hood’s character.

The sheriff notes that the outlaws keep a fee from what they steal. “Moneylenders do much the same thing, but at least they have decently not to pretend it isn’t in their own interest.” Also, in the TV show Robin and his men often killed the sheriff’s guards at whim. Here the sheriff describes the guards Robin kills as “a man who is simply carrying a sword so as to put food on his table, a man who earns no more than the ploughboys and the swineherds that you prefer to call ‘the people’!”

Just as when Will Scarlet raised similar concerns in TV episode “The Lord of the Trees”, Robin doesn’t have a good response to this.

In 2019 Chinbeard Books released novelizations of the audio books, just as the original TV episodes had been adapted into novel form.

Birch’s novelization considerably expands the story with additional scenes for the other outlaws — most notably Robin’s foster brother Much. Guy of Gisburne and the other boorish knights. But the expansion dilutes the audio story’s powerful focus on Robin, the sheriff and the priest.

Sanctuary isn’t a Christmas special in the sense of the Doctor Who TV Christmas specials. There are none of the Dickensian trappings of trees, presents and carols. But it is set “in the Season of the Christ Child” and deadly winter environment was rarely glimpsed in the TV series. The winter storm isolates the main characters, and crackling fire inside the chapel makes an effective audio backdrop. There is an element of holiday mercy. And there are faint echos of Mary and Joseph seeks sanctuary.

Order Sanctuary and other Robin of Sherwood productions

Buy Sanctuary: A Robin of Sherwood Adventure on Amazon.com

Buy Sanctuary: A Robin of Sherwood Adventure on Amazon.co.uk

Buy Sanctuary: A Robin of Sherwood Adventure on Amazon.ca

Buy The Knights of the Apocalpye as a digital download

Buy Robin of Sherwood: A New Adventure on CD

Buy Robin of Sherwood: A New Adventure as a digital download

All four adventures in this set are also available individual as digital downloads, as well as other special Robin of Sherwood audiobooks featuring other cast members. Check out Robin of Sherwood on Spiteful Puppet for all options. Please note that productions that are only available to residents in the UK may not be accessible to those outside of the UK.

If you enjoyed this interview, check out the following: