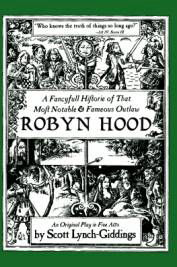 Note: This is an article about a 1990s Robin Hood play done in the style of William Shakespeare. If you want to read about the Robin Hood legend during Shakespeare's own time, check out this page.

Scott Lynch-Giddings is a Chicago playwright who wondered what a Shakespearean Robin Hood might be like, and so he set out to write the Bard's version of Robin Hood.

His use of language is very good. Lynch-Giddings has done a considerable amount of research into the expressions and idioms of 1590s speech. But more than merely accurate, his use of language is close to Shakespeare in the sheer level of wit and playfulness. One, perhaps minor example, involves Robin Hood invoking a familiar Robin Hood expression. Will Scarlock is mocking Robin for his love of Marian, and Robin says:

Thou hast given advice which oft hath hit
The mark on many things, but not on Love:
On Love, thou speakst of what thou dost not know,
For thou art one that never bent that bow

As the footnote dutifully tells us, "'Many speak of Robin Hood that never bent his bow' is an old saying."

Also, found are the witty insults and banter of Shakespeare, and the Bard's crowd-pleasing sexual innuendo, in this case of the sale of pots and pans. But the puns and word-plays are so common that it grows somewhat tiring after a while. Plain speech would sometimes be a welcome novelty.

Unfortunately, while he has ample command of metaphor, Lynch-Giddings doesn't quite have the poetic range of the Bard. The language is fun, but it doesn't have an emotional core that lingers in the mind. And the great inspirational call to action (delivered here by Marian) does little to inspire my interest, let alone want me to risk my life in a dramatic adventure. (A similar problem exists in the Kevin Costner film.)

All my criticisms aside, I should say that Lynch-Giddings's work is vastly superior to the two genuinely Elizabethan plays scripted by Anthony Munday. In use of language, plot and faithfulness to the legend, this Chicago playwright far exceeds an Elizabethan counterpart. But when held against William Shakespeare, sadly Scott Lynch-Giddings falls far short -- as do most other playwrights, however. [Looking back on this review from 2019, I think I was too harsh on Munday.]

In terms of plot, much more is taken from the Robin Hood legend than Munday ever borrowed. In particular, scenes from the early ballads The Gest of Robyn Hode and Robin Hood and Monk are used. (I do think that the references to the Virign Mary, common in the medieval ballads, would have been frowned upon in the Elizabethan era.) However, Lynch-Giddings is acceptably anachronistic in some of his borrowings. I see elements in the ransom plot and ambush by false outlaws plot that seems to owe a debt to the 1819 novel Ivanhoe, or one of that book's descendants. I also see a touch of Errol Flynn, particularly in the Robin and Marian romance and banter.

The main plot of Earl John and the Sheriff's machinations for Richard's throne and the king's ransom are pure Walter Scott. Making Robin Hood "Sir Robert Turneham" is new, although like Munday's play, Robin is also the earl of Huntington.

The borrowings from future versions of the legend nicely help to fill out the plot. But they also show part of the problem with not only Lynch-Giddings's Robin Hood -- but problems that true Elizabethan playwrights also would have faced.

The Robin Hood legend has done very well in film. And there are moments in the play which are written for sheer Hollywood magic. The ambush of the sheriff and Marian, one can picture it happening like in the Errol Flynn movie. The archery competition cries out for the trick shooting of Howard Hill (archery coach on Errol Flynn's The Adventures of Robin Hood). The battle between the sheriff's men disguised as outlaws and the Merry Men calls for widescreen treatment. But here, by necessity, all those scenes take place off stage. Even if a production were to stage some of those scenes, they wouldn't be able to top the production values of film.

There was a time when there were more references to Robin Hood folk drama than any other kind of folk drama in Great Britain. But the sorts of fights in old-fashioned Robin Hood games -- bouts with swords, wrestling or yes, archery -- would seem some what small scale as our expectations in Robin Hood action have risen. Even by the time of Queen Elizabeth I, Robin Hood had begun to outgrow his role as a simple local combatant. And those simple forms of combat would still be difficult to pull off in time when people are concerned about an actor's safety.

So, we are left with expectations of great action that can't be shown on stage. Well, a lot of the "action" in Shakespeare's plays happens off-stage as well. The heart of the play comes in human responses to the off-stage action.

And here's where the problem with Robin Hood truly lies. Robin Hood is not often a complex character, nor are any of his Merry Men. That's true of the legend in general, and it's true in Lynch-Giddings' play as well. The emotional resonance within the characters -- which is vital when the action is not staged -- is somewhat muted. Yes, Robin does have a grudge against the sheriff, his wits are addled by love, and Marian discovers what the world is truly like. But it is all very simplistic. While their external fortunes have changed, internally the characters remain pretty much the same from beginning to end. Some cinematic spectacle would have concealed these faults better. As with the last time I reviewed a play, I am reviewing from script only. Actors may be able to bring this piece to greater life.

It's a dilemna for anyone trying to do an Elizabethan Robin Hood. But still the attempt to do Robin Hood in the style of Shakespeare is a fascinating experiment. And I think Scott Lynch-Giddings succeeds better than most would. Ultimately though, even in terms of language, it does remain an experiment, a gimmick. Still, a very noble and intriguing attempt.

Where to Find This Play

Buy A Fancyfull Historie of That Most Notable & Fameous Outlaw Robyn Hood on Amazon.com

Buy A Fancyfull Historie of That Most Notable & Fameous Outlaw Robyn Hood on Amazon.co.uk

Buy A Fancyfull Historie of That Most Notable & Fameous Outlaw Robyn Hood by Scott Lynch-Giddings on Amazon.ca