Nottingham:
A Dark Tale of Christmas Spirits by Adam Greenwood 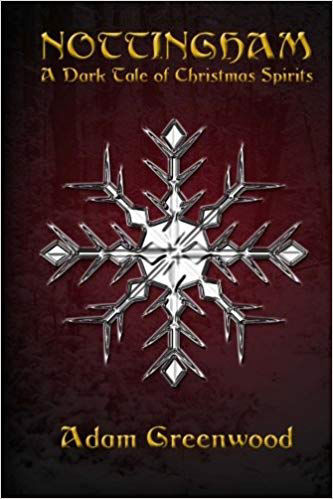 Adam Greenwood previously tackled Robin Hood in Robin of the Wood: Legend and two books in the altered continuity of the Legacy Saga. He’s also written books about Nicholai and Annalina — you might know them best as Mr. and Mrs. Santa Claus.

Now Greenwood puts those characters into one story — a tale inspired by the classic Charles Dickens novel A Christmas Carol. But this time, it’s not Scrooge, that’s in need of redemption — it’s the Sheriff of Nottingham.

The story is framed as a favourite story being told to a girl — the tale of how a bad man turned good.

AThe Sheriff is visited by “a tall white-haired man in a dark red, fur-trimmed coat”. That’s right, the Sheriff of Nottingham isn’t haunted by Jacob Marley but rather Father Christmas himself appears, or at least the Nicholai character from Adam Greenwood’s Christmas canon.

TJust as Scrooge was in the Dickens novel, the Sheriff is shown his past — both happy times and sad. When he went into the career that eventually led to him becoming Sheriff, his family went missing. It parallels the loss of Scrooge’s beloved sister Fan who died in childbirth.

In the present, the Sheriff sees not the suffering Cratchit family but rather his hated enemy, Robin Hood. The Sheriff is shocked to discover his enemy is a family man. (The readers of Adam Greenwood’s other novels won’t be surprised by this.) Even more shocking for the Sheriff is that Robin Hood’s wife Holegn reminds him of someone he lost long ago.

As for the vision of the future, that’s another departure from Dickens. Scrooge was, to quote Dickens, “a squeezing, wrenching, grasping, scraping, clutching, covetous, old sinner” but even he was not as villainous as the evil Sheriff of Nottingham. What he sees is more monstrous than the death of Tiny Tim. The Sheriff’s future self isn’t a corpse so much as a monster.

Of course, he changes his ways and gains a family of sorts.

A Jem of a Tale

It’s hard to live up to the majesty of the Charles Dickens’s masterful novel, but Greenwood crafts a fine short tale that homages Dickens and also explores his literary universe. The use of Holegn’s mysterious parentage is a neat twist that pays off long term readers.