Robin Hood - Green Lord of the Wildwood
by John Matthews 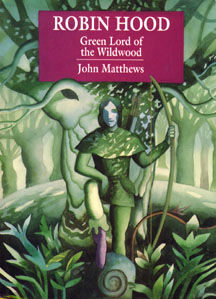 This Spotlight Review looks at the original 1993 Robin Hood book by John Matthews. Not all of these comments may apply to the subsequent editions of his work on the Robin Hood legend.

Over the years, there have been many suggestions that Robin Hood was actually a mythological figure such as a fairy. References to this are usually fleeting, and typically they base themselves on the later legend. Now personally I think the mythic argument has been overstated and exaggerated. But I was looking forward to reading a book that, while I may not agree with its conclusions, at least makes a well-thought out, well-researched case.

Unfortunately, this book doesn't do that.

There are many things to like about this book. There are many illustrations -- some woodcuts, some photographs and new drawings by Chesca Potter. There are some ballads reprinted, including the frequently mentioned but rarely collected Life of Robin Hood from the Sloane Manuscript from circa 1600. If you're into Wicca or just the new age in general, you might enjoy the two rituals at the back and the guided meditations after each chapter.

And most of all, Matthews, a well-known writer of many books on mythological themes, includes a lot of interesting information on the May Games and the various myths and themes (such as the Green Man) he feels may have inspired the legend of Robin Hood.

The problem is I don't know when to trust him.

His conclusions are drawn a little too quickly. He declares his case proven without going into as much detail as I'd like him too. And he often bases his case on later tales of Robin Hood suggesting they come from an earlier tradition than the earliest surviving tales. One example is when he describes a 19th century ballad about Robin's birth "which may preserve an older truth than any of the medieval ballads." He also writes of the legend, "The adversary is nearly always 'Norman' rather than simply 'the rich'." Actually, the Normans vs. Saxons element of the legend didn't come to the fore until 1819, centuries after the earliest ballads and plays.

But it's not really the unsupported arguments that cause a lack of trust. The numerous factual errors do that. I stopped counting at 15 mistakes. It would be nitpicking to list them all, but I will mention a major recurring one.

The first literary reference to Robin Hood is in 1377. Matthews says this reference, by William Langland, was made in 1337. Okay, one very slight mix-up is forgivable. But several dates are rendered wrong. And the Langland reference is subject to further mistakes. For example, he writes that it is "clear that annual fairs, in all probability connected with solsticial worship, were firmly established as early as the 13th century (the time in which Robin Hood ballads were circulating widely.)" But if first reference to the Robin Hood ballads is from the late 14th century, how do we know they were circulating widely in the 13th century? Did he get the date of the fairs wrong or just mix-up the date of the Robin Hood ballads? Perhaps he means that the combined surnames like Robehod, seen in the 13th implies the existence of the ballads. Who knows? And further still, he mentions the French pastoral story of Robin et Marion correctly dating this play about a shepherd and his shepherdess at c. 1283. But he goes on to say, "even here the old themes of the May Day revels hold true -- and this only two years after Langland had recorded the first known mention of Robin Hood in English literature (See Chapter 1)." But chapter one says that reference came in 1337, or to render it more correctly, 1377. Neither date is two years before 1283. Something is definitely wrong here.

And if he makes these kinds of mistakes in things I do know, how can I trust Matthews as an authority on things I don't know?

There are good things in this book, no question. But it is very badly in need of a fact checker. So, be wary of getting your Robin Hood information from John Matthews.

Where to find Robin Hood by John Matthews