The Ivanhoe Gambit
by Simon Hawke 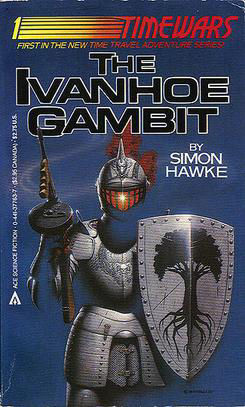 Paperback: Ace Books, 1984
I've asked for requests as to what versions of the Robin Hood legend I should spotlight in this section. A few months ago someone e-mailed me and asked if I had read The Ivanhoe Gambit by Simon Hawke. I hadn't. So, I visited a few used bookstores and found a copy.

Sherwood Forest is a popular destination for time travellers, and so it's a natural choice that Robin Hood should play a part in the first of Hawke's Time Wars series. But more specifically, this novel plays off Sir Walter Scott's Ivanhoe -- the popular 19th century novel that shaped the modern Robin Hood legend.

Adventures in History (and Literature)

In the Time Wars future, war is a thing of the past -- quite literally. Instead of messy and destructive battles in the present, armies use time machines to drop soldiers into the great battles of history and evaluate their performance. It's on this basis that disputes are settled. The time travellling army has a great recruiting campaign too. You only have to sign up for a week's service.

The problem is that soldiers can spend 6 months in the past and return to the present only 5 minutes after they left. That means although they are six months older, only five minutes are counted towards their service record. It takes a long time to get out of the army. Four soldiers -- Lucas Priest, Bobby Johnson, Finn Delaney and Corporal Hooker -- are offered a chance for early discharges with substantial pensions. All they have to do is save history.

One of their bosses has gone rogue. Referee Irving Goldblum has travelled back to 1194 and captured King Richard the Lionhearted. Goldblum has undergone cosmetic surgery and take Richard's place in history -- with one major exception. Goldblum has no intention of dying at Chaluz in 1199. Such a major change would seriously damage the timeline. So, Priest and the others are to stop the fake King and keep history on course. They replace four people from the past.

Priest and Hooker take the place of Sir Wilfred of Ivanhoe and his squire. Finn Delaney with his martial arts skills (including the quarterstaff) and great height takes the place of Little John. And Bobby Johnson becomes Robin Hood.

Johnson discovers that the real Robin Hood was a drunkard and a poor shot. Robin was also completely dominated by Marian, the sheriff's wife -- the real leader of the Merry Men. When the fake Robin Hood and Little John join the Merry Men, some changes are in order. The outlaws are taught Asian martial arts and US Army discipline. The Merry Men are also given army-style crewcuts.

Unlike the man he replaces, Johnson as Robin Hood is a very good archer. But not good enough for a well-known story. He uses a high-tech guided arrow to cheat and split the arrow in the classic archery contest.

This is a fun romp.

It's set more in the 1189 of Sir Walter Scott than the 1189 of real history. And it has some fun with Scott's novel. For example Priest/Ivanhoe tries hard to avoid Rowena.

And it plays with the Robin Hood tradition. It's not the first nor last story to portray the real Robin Hood as a foolish ne'er-do-well, and most of the other little comic realism tweaks on the legend have been done elsewhere. Novelty is a rare commodity in a legend that's over 600 years old. While his ideas aren't entirely new, Hawke has a lot of fun with the Robin Hood characters.

It doesn't fall into my list of favourite Robin Hood novels. But it is a pleasant -- and short -- read.

Where to find The Ivanhoe Gambit

Buy The Ivanhoe Gambit on Amazon.com

Buy the Ivanhoe Gambit on Amazon.co.uk

Buy The Ivanhoe Gambit on Amazon.ca