GURPS: ROBIN HOOD
Adventures in Sherwood Forest and Beyond
by Robert M. Schroeck and Peggy Schroeck 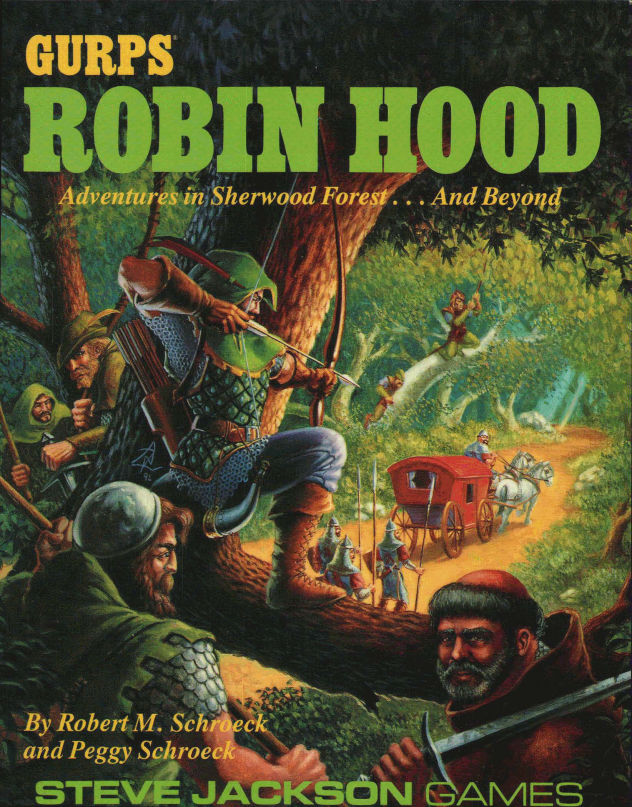 If you haven't heard of GURPS by Steve Jackson Games, it's likely you've at least heard of "Dungeons & Dragons" -- the most famous of the classic role-playing games (RPG). These days such games have taken on the name "tabletop role-playing games" to distinguish themselves from computer games that follow a similar structure.

GURPS is like D&D, only smarter. When I first wrote those words over 20 years ago my days of playing GURPS were a recent memory. And that's what we generally thought of the game -- it was the RPG for smart people.  And to be fair, there was a reason for such RPG snobbery.  In the classic form of Advanced Dungeons & Dragons you built characters with certain attributes -- strength, dexterity, charisma and the like -- how strong, agile and charming you were. But with GURPS the character you play is built with virtues, faults and quirks that you should role-play. You don't constuct an adventurous He-Man, you are encouraged to create a genuine character. Also, it's more conducive to thoughtful solutions than other RPGs -- perfect for adventures with that tricky and clever outlaw.

The Basic Set gives you rules that work in any genre (fantasy, science fiction, Old West, Swashbucklers, and so on.) Sourcebooks like GURPS: Robin Hood give you guidelines to play a particular type of adventure. But the rules are still written like suggested guidelines. There is much you have to decide upon.

Robin Hood as a Concept

GURPS: Robin Hood isn't the first attempt at converting Robin Hood to a role-playing scenario. Issue 55 of Dragon Magazine (1981) offered up versions of Robin Hood and the Merry Men suitable for Advanced Dungeons & Dragons, designed by fantasy novelist Katharine Kerr. Graham Staplehurst produced Robin Hood: The Role Playing Campaign for I.C.E. (Iron Crown Enterprises) in 1987. Staplehurst had previously penned two "choose your own adventure" (the literary cousin of role-playing games) tie-in novels for the popular TV series Robin of Sherwood, and his RPG supplement feels like Robin of Sherwood with the serial numbers filed off.

But Robert M. Schroeck and Peggy Schroeck didn't just design one Robin Hood scenario for GURPS in 1992. They created several.

If you poke around other parts of my website, you'll see me talk about a lot about how flexible the Robin Hood legend is. This role-playing sourcebook plays with that idea by treating Robin Hood as a concept, not just a man. It offers information on how to set an outlaw role-playing campaign in six different eras -- thus showing off the range that the GURPS system has,

They take the idea of the noble outlaw and show it in the medieval setting, the Scottish highlands of the early 1700s, the 19th century Old West, the late 20th century superhero city, the cyberpunk environs of then-future early 21st century, and the far-flung space adventures of the far future.

The Legend of Robin Hood section is the medieval era, what we generally think of as "Robin Hood". This is the largest section taking up about a quarter of GURPS: Robin Hood.

The book gives some historical information, pre-made characters of all the major characters of the legend, and lots of food for thought. For example, do you want the happy, dandyish Will Scarlet, or the angry, ruthless Will Scarlet? Is Robin a nobleman or a yeoman? Will their headquarters be in a network of trees, a cave or both? You decide. This section cobbles together elements for different version of the legend. Take their basic character of Friar Tuck. His quirks include loving dogs (like in the ballad) and calling Marian "Little Flower" (like the Robin of Sherwood TV series.) The character profile for Robin Hood is inspired by Howard Pyle's version, as the quirk "Constantly utters aphorisms and attributes them to a 'Gaffer Swanthold'" is straight from Pyle's much-reprinted 1883 book The Merry Adventures of Robin Hood of Great Renown in Nottinghamshire.

The Schroecks often credit their sources. They say how Greentree, the name of Robin's lair, comes from Robin McKinley's The Outlaws of Sherwood. They talk about the differences in the Muslim Merry Men -- about Nasir from Robin of Sherwood and Azeem from Robin Hood: Prince of Thieves.

There is a lot of good stuff just in this one section. And there is a room for a lot more. I think the whole book could have been devoted to the medieval Robin Hood.

Other Times, Other Places

The Ghost of the Moors: This section is a swashbucklers campaign set in Jacobite Scotland featuring the adventures of Sean Alastair MacDonall. MacDonall, sombre by day, becomes the high-spirited Black Ghost at night, a highway man who looks more like Zorro than Robin Hood. In this game, it is the English who take the place of the Norman villains. Scottish nationalists are the heroes. I like this setting, and it's my third favourite of the book.

Splits Arrow: This ties into GURPS' Old West sourcebook. The hero of this section is Jackson Ryder, a white man raised by Native Americans, who rides into action as Splits Arrow, head of a band of raiders fighting for Native rights. I'm not a huge fan of westerns, but this seems fun if you are. (I wasn't a huge fan of westerns when I first wrote this in 1998. I've since come around. And now I suspect that Kevin Costner's Dances with Wolves was a cheeky inspiration here.)

Dark Justice: By day, he's the respected superhero Lightbolt. By night, he's the dark vigilante Librum who kills the scum of New York City. I'm a fan of comic books as well as the Robin Hood legends. This seems like a good superhero concept, but I think it isn't that Robin Hoodish other than Librum's energy powers take the form of a bow and arrow. This is the section which could most easily be dropped from the book. (Looking back on it with hindsight I can appreciate that it must be have been challenging to come up with a superheroic Robin Hood that wasn't a knockoff of Green Arrow from DC Comics.)

Cyber-Robin: Now, this looks like a lot of fun! Set in the cyberpunk future where people plug their brains into the computer, Robyn Lincoln travels the net as Cyber-Robin electronically robbing from the rich corporations and giving to charity. Her computer image looks like Errol Flynn and many of her allies, the multi-racial Merry Men, don't know she's a woman. Her homophobic Marian would be shocked to learn the truth. Little John is a computer AI. And the sheriff is Mayumi Hato, head of security for Kironawa Corp. This section takes the concept of Robin Hood and really runs with it. (When the book was published and even when I first wrote the review, the cyberpunk reality seemed like a plausible near-future. Now it's retro. And speaking of comics, I expect that Oracle -- the former Batgirl -- from DC Comics was an influence here.)

Asteroid Raider: Kevin Neiborr, captain of the Nosferatu, raids rich outer space corporations, assisted by a crew which includes an alien named PettiJohn. It seens like good Space action to me.

Over all, the books concept is strong -- I like the variation. But at the same time, it feels a bit like an attempt to pad out the medieval section. I do like just how many sources they pull from, and with the extensive bibliography this would have served as a reference book of the then-modern Robin Hood legend.

The art by Ruth Thompson is effective in some places, but scratchy and unfinished in others.

Issue 27 of the discontinued magazine Roleplayer features a section cut from the book set in the Dust Bowl American midwest of the 1930s. Fighting for farmers' rights, Randall Taylor is a bold and benevolent bank robber. The bank, like Robin's medieval home, is named Barnsdale.

The writers, Robert M. and Peggy Schroeck, also wrote the GURPS: Camelot sourcbeook. That book also features three main types of campaigns -- mythic, cinematic and historical. It's worth a look. The divided nature of this earlier work feels stronger as all versions presented are well-proven concepts.

GURPS: Robin Hood really shows the variety inherent in the legend. Even if you're not into role-playing games, it's worth picking up.

Where to Find GURPS: Robin Hood

The extensive back catalogue of GURPS products is available on Warehouse 23, operated by Steve Jackson Games.

Out-of-print copies of GURPS: Robin Hood can also be found on Amazon.