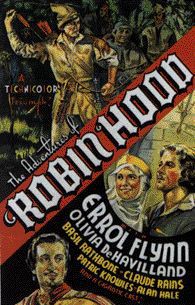 The Robin Hood legend has fascinated me for as long as I can remember. It's easy to explain why I like some versions and why I don't like other versions. It's a little harder to explain why I love the legend as a whole.

What Robin Hood stands for can change radically. The character can be a left-wing redistributor of wealth or a right-wing tax-fighter. Robin can be a nationalist or an environmentalist. The flexibility of the Robin Hood legend is its greatest strength. And yet, the legend would not last as long as it has if the character was a mere cipher.

The story of Robin Hood is not just a vessel for a political or social agenda. It is a story with drama, action, humour and all the other elements that allow good tales to last.

Perhaps Prince John says it best in the Errol Flynn film, "By my faith, but you're a bold rascal. Robin, I like you." Even though the Robin Hood legend has changed greatly over time, there is a sense of boldness in the best Robin Hoods. I think whether we're children in the schoolyard or stuck in a cubicle, there are times when we want to speak out and we can't. Robin Hood can and does. His defiance and outlaw freedom appeals to anyone who feels frustrated or inhibited.

And in the best Robin Hoods, there's a sense of the trickster about him. Robin doesn't just fight his enemies with arrows and swords. He mocks them. In some ways, Robin's wit makes him seem more rebellious and defiant than any physical weapon ever could.

And though it's role in the early legend is murky at best, I would not want tob be like certain newspaper writers and leave out Robin Hood's sense of charity and helping the underdog. Sometimes he'd just flout authority but other times Robin Hood helps those in distress. That's not a bad thing.

Time and again, I reflect upon a scene between Robin Hood and Maid Marian in the 1938 movie. Robin and Marian have left the grand banquet in Sherwood as Robin helps those suffering the most from hunger.

MARIAN (low): You're a strange man.

ROBIN: Strange ... because I can feel for beaten, helpless people?

MARIAN (swiftly): No . . . ! You're strange because you want to do something about it. You're willing to defy Sir Guy -- even Prince John himself -- to risk your own life. And one of those men was a Norman!

ROBIN: Norman or Saxon, what's that matter? It's injustice I hate, not the Normans.

MARIAN: But it's lost you your rank, your lands. It's made you a hunted outlaw when you might have lived in comfort and security. What's your reward for all this?

ROBIN (incredulous): Reward? (Looks curiously at her again.) You just don't understand, do you?

ROBIN: You do? Then that's reward enough.

- The Adventures of Robin Hood (1938), Screenplay by Norman Reilly Raine and Seton I. Miller

A Robin Hood scholar once told me that they got their basic morality from the 1950s Robin Hood TV series starring Richard Greene. Personally, I still refer to that scene in the 1938 movie as a goal to strive for.

That scene also mitigates an element of the modern Robin Hood legend I have trouble with -- the conflict between the Saxons and the Normans. It had been a British political trope to associate the unjust laws with the Norman Conquest and to depict Saxon times as a golden age of liberty. Sir Walter Scott played with this trope in his 1819 novel Ivanhoe. That novel featured Robin Hood in a supporting role and would go on to be one of the most successful novels of the 19th century. Since then, Robin Hood was repeatedly depicted as a Saxon fighting against the Normans.

But the problem with that trope is that it can glorify the Saxons. And I have seen a disturbing number of people who try to associate Robin Hood as a great Saxon hero -- not against the Normans, but against anything that doesn't meet their narrow, and white, view of Englishness.

So, even though the 1938 film plays with the familiar Normans and Saxons tropes, I am very glad it depicts a Robin Hood who does help those who are different than him, even the Normans who suffer too.

I'm also glad of the trope that began -- accidentally and somwhat problematically -- with Robin of Sherwood to include non-English and (with the later examples of the trope) non-white members in Robin Hood's band of outlaws. Diversity is a good thing. Those who try to depict Robin as purely Saxon make me uncomfortable.

For centuries there have been stern figures -- outraged that people would derive enjoyment or even morality from an outlaw, a criminal.

And yet while Robin Hood scholars sometimes go out of their way to distinguish the medieval Robin Hood from his relatively tame modern counterpart, there's a streak of morality in those early tales as well. That perhaps in the greenwood they are more noble, more honest, more loyal, more just than those in court.

Adventure, humour and social justice -- is it really any wonder that the Robin Hood legend appeals to me?

For a legend that was well-known in AD 1377 to still be so widely known today, well Robin Hood's obviously a likeable fellow.

© Text and Location pictures, Copyright 2019 Allen W. Wright - All Rights Reserved
The poster and screengrab are from the 1938 film The Adventures of Robin Hood, Copyright Warner Bros. Used without permission under fair use